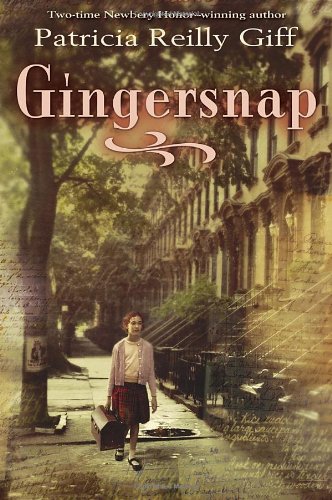 Gingersnap
Patricia Reilly Giff
It's 1944, W.W. II is raging. Jayna's big brother Rob is her only family. When Rob is called to duty on a destroyer, Jayna is left in their small town in upstate New York with their cranky landlady. But right before he leaves, Rob tells Jayna a secret: they may have a grandmother in Brooklyn. Rob found a little blue recipe book with her name and an address for a bakery. When Jayna learns that Rob is missing in action, she's devastated. Along with her turtle Theresa, the recipe book, and an encouraging, ghostly voice as her guide, Jayna sets out for Brooklyn in hopes of finding the family she so desperately needs.
2 Votes

Gingersnap is about a girl named Jayna.  She lives in a nice house with a pond in the back for her pet turtle.  Rob, her older brother, looks after her because their parents died.  It is the middle of World War II, so Rob decides to go overseas and fight.  Jayna has to go to stay with the annoying landlady, Celine, until her brother gets back.  Before he leaves, he gives Jayna their mom's little blue cookbook.  In the cookbook, there is a name and an address to a baking store called Gingersnap and a mysterious person’s name.  Soon after

What's this?
Gingersnap review by aschoenfeldt

In the midst of World War II, Jayna, a young orphan, must piece together her family history after her beloved older brother enlists in the army. Her longing for a family counters her constant worry over her brother's safety, and Jayna finds herself losing hope. When she finds clues of her parent's past, Jayna discovers the possibility of finding a grandmother she has never known. Jayna, along with her turtle and an old family recipe book, endeavors to find her grandmother and reunite with her brother.