The Ghosts of Lone Jack 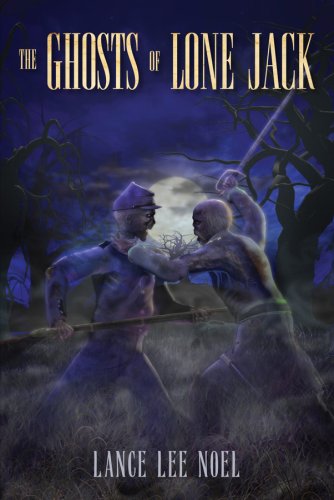 The Ghosts of Lone Jack
Lance Lee Noel
A book both educational and entertaining! Jared Millhouse and his dad plan to spend an uneventful summer on his grandfather s farm in Lone Jack, Missouri. Then Jared runs into the ghost of a Civil War innkeeper and wonders if he s lost his mind. With the help of his grandfather--and some local characters--Jared and the Crossroads Gang uncover the truth about the Civil War battle that trapped so many bloodthirsty ghosts in Lone Jack. They even recruit a pair of eccentric ghost hunters to help. When it comes to facing down the local bully, dodging the power-crazy sheriff, or escaping convicts, Jared can count on his friends. Together, they face haunted baseball diamonds, embattled cornfields and abandoned mines. But when Confederate and Union ghouls line up on the battlefield, the entire town relives the gruesome Battle of Lone Jack, as it was fought in 1862. Then only Jared can save the town from its ghosts.
2 Votes

Tweet
The Ghosts of Lone Jack review by JASto

Jared Millhouse is spending the summer in Lone Jack, Missouri when he encounters the ghost of a long-dead innkeeper in the woods behind right field. Soon other ghosts and groups of ghosts begin to make their presence felt. First comes the innkeeper. Next, a gang of ball-and- chain wielding slaves appear. Hot on their heels are two- headed Indian ghosts. And then, there are the soldiers, reliving the battle of Lone Jack, exactly as it happened in 1862. They all demand "the key".

What's this?
The Ghosts of Lone Jack review by ROK_Hopkins

This book is about a boy who lives with his dad since his mom died. They go to the old creepy town of Lone Jack to visit his grandpa. A long time ago the town was caught in a massive, bloody crossfire in the Civil War. It is now haunted by the souls of the fallen. The battle may be over for us but the battle in their world has only just begun. And now this boy must find a way to set these souls free!