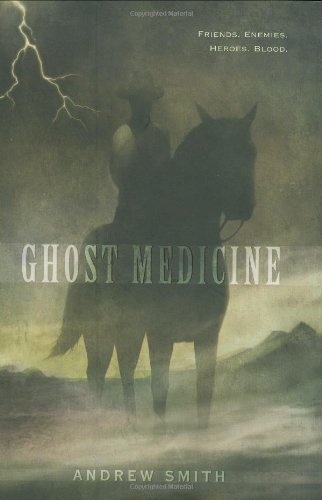 Ghost Medicine
Andrew Smith
The summer before Troy Stotts turns seventeen, his mother dies. Troy and his father barely speak, communicating instead by writing notes on a legal pad by the phone. Troy spends most of his time with his closest friends: Tom Buller, brash and fearless, the son of a drunk; Gabe Benavidez, smart enough to know he’ll never take over the family ranch; and Gabe’s sister, Luz, whose family overprotects her, and who Troy has loved since they were children.           Troy and his friends don’t want trouble. They want this to be the summer of what Troy calls “ghost medicine,” when time seems to stop, so they won’t have to face the past or the future. But before the summer is over, their paths will cross in dangerous and fateful ways with people who will change their lives: Rose, a damaged derelict who lives with a flock of wild horses and goats; and Chase Rutledge, the arrogant sheriff’s son.            Troy and his friends want to disappear. Instead, they will become what they least expect —brothers, lovers, heroes, and ghosts.
1 Vote

Troy Stotts has lost most of his family, leaving him with his dad who hardly speaks. He and his friends Gabe Benavidez and Tommy Buller decide that they want to disappear in what they call "ghost medicine." However, when the town bully Chase Rutledge steals their clothes as they're swimming they chase him down to find him attempting to harm Gabe's sister, Luz. They get him away from her, but Gabe accidentally shoots him, causing trouble. The three take a trip up to the mountains, but Chase and his friend Jack follow.