The Ghost and the Haunted Mansion 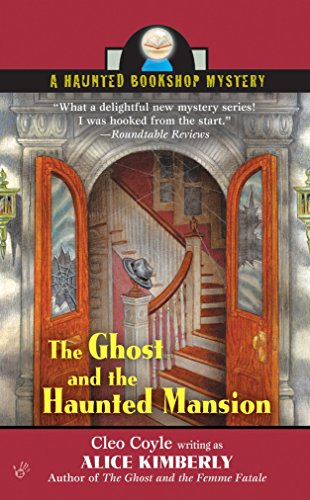 The Ghost and the Haunted Mansion
Cleo Coyle, Alice Kimberly
When the local mailman inherits a haunted house and demands an exorcism, Pen must act fast to save her favorite ghost in this Haunted Bookshop mystery from New York Times bestselling author Cleo Coyle, writing as Alice Kimberly.Bookshop owner Penelope Thornton-McClure didn’t believe in ghosts—until she met the spirit of hard-boiled 1940s detective Jack Shepard. And when Pen’s friend and mailman, Seymour Tarnish, gets into deep trouble, Pen not only believes in her ghost—she also thinks he can help...   An elderly lady of leisure has been found dead on posh Larchmont Avenue, her will recently, and suspiciously, revised to name Seymour as heir to her mansion. Just as eyes turn to him as the murderer—and Seymour gets busy settling into his ritzy digs—the mansion’s ghosts begin plaguing him. So he hires a team of parapsychologists to exorcise all the spirits from the town of Quindicott—and that includes Jack Shepard. Now Pen must act fast—because losing Jack scares Pen more than rattling chains and cold spots...
1 Vote

Tweet
The Ghost and the Haunted Mansion review by SPasqu

This book is a riveting, haunted mystery. It has the thrill of the chase and the thrill of the ghost. Two different genres beautifully blended into one book. Pen and Jack have such amazing minds, and then combined, they have the capacity to figure out any mystery they are confronted with, including figuring out who killed Miss Todd and why. While trying to catch the murderer, Jack shows Pen parts of his own case that tie into Miss Todd's murder. These two cases together make up The Ghost and the Haunted Mansion.