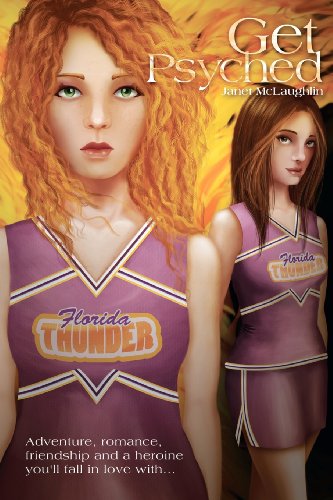 There's more at stake at this year's two-day National Cheerleading Competition than taking first place. Lives will be changed and possibly even lost if 15-year-old Zoey Christopher doesn't take action. She knows she'll need help, but who to trust is the problem. No one knows about Zoey's gift and she wants to keep it that way. Being fifteen is tough enough. Being fifteen and psychic — as Zoey would tell you if she trusted you — really sucks. At practice the night before the competition, Zoey gets a vision about a fellow cheerleader whose life is in danger. Later, she gets more sensory hints: a cheerleader surrounded by smoke and a panicking crowd; a vendor covered in ashes. To further complicate her life, she meets Josh, whose very touch sends her sensory system into overload. Circumstances force Zoey to tell Josh, and her friends Becca and Mike, about her visions. The foursome band together to stop the fire that threatens to destroy the hotel/convention center and the lives of so many of her fellow cheerleaders.
9 Votes

Zoey Christopher has psychic abilities. She has strange visions of a ferocious fire in the hotel where she and the other cheerleaders on her team have a huge competition. In her efforts to prevent this tragedy, she is forced to spill her secret to three friends: Becca, Mike, and Josh. Can the four prevent the disastrous fire in Zoey's visions? Or will the hotel be burned to the ground? Find out in Get Psyched.

What's this?
Get Psyched review by Brynn

"Get Psyched" is about a girl who gets these visions passed down from her grandmother. So you could say she is a psychic. When she is at a cheer competition for the weekend with no parents she starts getting these horrible visions of her friends burning in a hotel fire. She has to find a way to keep everyone safe or notify as many people as she can before anyone gets hurt. She luckily has the help of her 3 new friends.

What's this?
Get Psyched review by Purplecow130

This wonderful book is about a girl name Zoey who has visions of things that are about to happen. This time she has a vision about a hotel fire that is about to start. She sees many people getting hurt and she needs to find a way to stop it, and quick.She gangs up with  a couple of her freiends, spreads out, and find a way to prevent it. Later on  in the book they find out that the fire is intentional and that somebody is intentionally trying to burn down the hotel. They need to find this guy, and quick!

What's this?
Get Psyched review by katherine

If you like mystery and a hint of romance, then this is a book for you. Zoey, the main character, has to put her mind to good use and find out who is making the cheerleading competition a wreck. On the way, she meets a new girl who she really never noticed in her group. They become best friends, but Zoey gets a vision that her friend's life could be in danger. There is something different about Zoey; she is psychic and is ready to fight. Will she be able to keep her friend safe?

What's this?
Get Psyched review by emilyeggers78

In this book, there is a girl named Zoey. She has 3 wonderful friends that she truly cares about and she is constantly seeing visions of extremely bad things happening to them. In the visions she sees people that are burnt and she sees her friends hurt. She tries not to think about it because she has a big competition coming up and she needs to focus, but she can't help the thought of her friends getting hurt, and she needs to put a stop to it!

What's this?
Get Psyched review by hannah_marie3701

Get Psyched is a book about a girl who is a cheerleader. When she is at a cheer competition, she gets visions and sees that there is a really bad fire coming, so she is trying to stop it before it happens. Will she be able to?

What's this?
Get Psyched review by abrinton19

How would you feel if you knew something bad was going to happen but you couldn't prevent it? Well "Get Psyched" is one of those kind of books- a mysterious fun adventure. The main character Zoey is a psychic who sees visions with her friends in danger. She goes through obstacles where she gains friends named Becca, Mike, and Josh. They make promises and help her with the visions, her friends loyalty help her stop the harmful visions and save others!

What's this?
Get Psyched review by Jared_2318

Do you love mysteries? The book, "Get Psyched"  was a extravagant mystery. I think this book could get somebody's attention very fast. "Get Psyched" is about a girl named Zoey who participates in cheer competitions. While on a trip, she expirenced some terrifying visions. Zoey must protect her current friends and her new friends to come, but how will she do that?

What's this?
Get Psyched review by puggles88

In the book "Get Psyched," Zoey Christopher is a fifteen year old girl with psychic abilities. Zoey starts to have visions of a fire at an upcoming cheerleading competition. While trying to prevent the fire, Zoey experiences friendship and even a little romance.