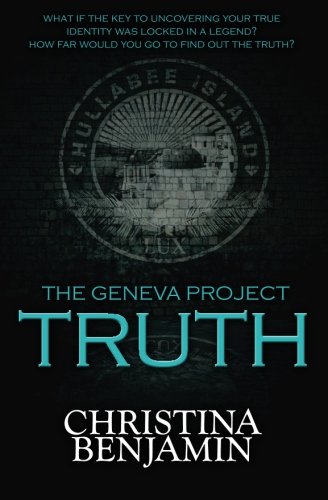 The Geneva Project - Truth
Christina M. Benjamin
Trapped on a flood ravaged island full of orphans, natives and wealthy citizens of the prosperous city Lux, a young girl named Geneva finds herself enslaved at an orphanage with no future and a past she can’t remember. That all changes when she meets someone who promises her that there’s more in store for her than she ever could have imagined. Her once dull life rapidly spirals out of control as she starts to acquire new magical powers that may be the key to unlocking an ancient legend along with her true identity. But first she must master these powers, all while trying to keep them secret from her friends and the evil head mistress at the orphanage. Before she knows it, Geneva is in over her head and has inadvertently wrapped her friends into her web of magic and lies and now all of their lives hang in the balance once the head mistress finds out her plan to prove that the legend of Lux may not be a legend at all! Who will Geneva trust and how far will she go to save her friends and find out her true identity?
5 Votes

I found the story slow at the start but it soon picks up.  It is about a girl who learns who she really is and what she can do. I think it’s an amazing story.

What's this?
The Geneva Project - Truth review by engineerphilip18

This book starts out with a teenage girl on an island. She is in a center for orphans after a great flood wiped out most of the island, including her family. In the orphanage, girls are called Janes and boys are called Johns.

What's this?
The Geneva Project - Truth review by LaRayne

LaRayne
Jane is just like all the other girls in the island orphanage, a Jane with a number. Searching for her own name starts when she meets John who tells her that his real name is Nova. It turns out that the whole island has a lot more secrets other than names. Like the fact that she has magical powers and that she, just another orphan, is destined to save the whole island.
Rating:
5

What's this?
The Geneva Project - Truth review by kendrat71

Jane 65 is a young girl who lives on Hullabee Island. Her real name is Geneva Sommers, and she is an orphan. She was found ten years ago after the Flood, and is the youngest of all the orphans at the Troian Center. The Troian Center is run by greedy, evil headmistress Greeley who collects all the valuables the youngsters find and hoards them, though the items could be used to help fund the rebuilding of the island. Greeley couldn't care less about names, so each girl is a Jane and each boy is a John.

What's this?
The Geneva Project - Truth review by joythean

Truth, a Geneva Project novel, is about an orphaned girl who lives on an island that was once devastated by the Flood.  Due to the Flood, many children have lost their families, so they are put in a place called the Troian Center that is run by a greedy, selfish headmistress.  All the orphaned children in this center are given simple names: girls are named Jane #__ while boys are named John #__.  The heroine of the novel is named Jane #65, the youngest member of the Troian Center.