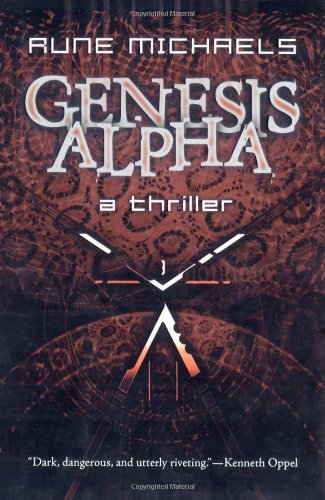 Genesis Alpha
Rune Michaels
Josh worships his older brother, Max. They look alike, they talk alike, and they both have the same interests, including their favorite massively multiplayer online role-playing game, Genesis Alpha. But Josh and Max have an even deeper connection. Because Josh was born for a reason. It was Josh's stem cells, harvested when Josh was newly born, that saved his dying older brother's life. Now that same beloved older brother is arrested, accused of the brutal murder of a teenage girl. Josh is bewildered. Is Max really a monster, or is all of this a terrible mistake? And if the worst is true and Max is guilty, does that mean Josh is guilty too? After all, Max wouldn't exist without him. But this is only the beginning. Before long, Josh will come to a number of searing revelations -- revelations that have dire implications not only for Max's future, but for Josh's as well. Rune Michaels explodes onto the teen literature scene with this gripping, chilling debut -- a compelling picture of the intersection where science, family, and morality collide.
1 Vote

The book Genesis Alpha was about a boy and his brother who even though they lived away from each other always found time to play an internet game called Genesis Alpha together every night. Then one day the boy realized that his brother had left his computer in the middle of the game without turning it off so he assumed something might have happened. You then find out that his brother was accused of killing a girl that went to his school. The police began to think that he had met her on this Genesis Alpha game and that he was doing this to many other girls.