The Garden of Darkness 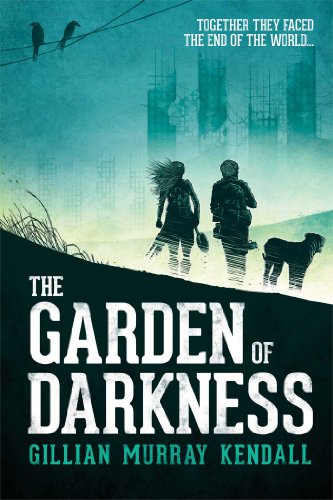 The Garden of Darkness explores the journey of four children who, after surviving a disease that seems to infect all but one adult, hope to find meaning by joining forces with this sole remaining grownup — who says he possesses a cure. These children discover, however, that the greatest meaning of all lies in the friendships they forge during the journey itself. This groundbreaking Young Adult novel—shaded with despair like that in The Road and hope and renewal like that found in The Hunger Games— shows the courage, tenacity and, finally, love necessary to create a new world from the ashes of the old.Their families dead from the pandemic SitkaAZ13, known as “Pest,” 15-year-old cheerleader Clare and 13-year-old chess club member Jem, an unlikely pair, are thrown together and realize that, if either of them wishes to reach adulthood, they must find a cure. A shadowy adult broadcasting on the radio to all orphaned children promises just that—to cure children once they grow into Pest, then to feed them and to care for them. Or does this adult have something else in mind? Against a hostile landscape of rotting cities and of a countryside infected by corpses and roamed by voracious diseased survivors, Jem and Clare make their bid for life and, with their group of fellow child-travelers growing, embark on a journey to find the grownup they believe holds the cure. Their only weapon is Clare’s dog, Bear. But Clare and Jem, as well as their followers, are hampered by the knowledge that everything in this new child-led world had become suspect—the love of diseased adults, alliances, trust, hope. As Clare and Jem learn to stitch wounds, skin deer and survive in the ashes of the old world perhaps it is no surprise that they begin to find that friendship is as redemptive as anything they seek—that friendship has its own kind of healing power. And, at the end of their journey, in the face of the ultimate betrayal, they discover that out of friendship can come love.
2 Votes

Normally, 15-year-old cheerleader Clare wouldn’t be caught dead hanging out with 13-year-old Jem, a talented chess player. But now, she really might die if she traveled solo. Their dystopian world has been struck by SitkaAZ13, a terrible disease with no cure. Pest, as the disease is commonly known, affects everyone once they reach their late teens. The few remaining adults, called “the Cured,” are feared for their unraveled minds and vicious characters. One mysterious figure, “Master,” stands out among the scant population.

What's this?
The Garden of Darkness review by jotaf

The Garden of Darkness is a book about a girl named Clare.  She becomes an orphan because of a mysterious illness called "Pest."  Pest is a disease that is killing all of the adults and most of the children in the world.  Only a small portion of children will survive, and even they will die of "Pest" in time.  Clare is one of these survivors.  She knows she is close to the age where “Pest” will set in anyway (16 - 18), but because of mysterious broadcasts, she knows she has a chance.  One adult has survived “Pest” and

The Post-Apocalyptic Genre and The Garden of Darkness

The Garden of Darkness takes as its starting place a post-apocalyptic landscape, a popular setting ever since Mary Shelley wrote The Last Man in 1826.  But The Garden of Darkness, as the plot unfolds, reinvents this venerable genre:  disease and death are balanced by the regeneration of a tired earth.  This post-apocalyptic pastoral provides a nurturing space—a garden, not the glowing earth of a post-atomic world.  Against that backdrop, the child-heroes of this book have room to forge bonds of friendship that are, in the final analysis, the most effective weapons they could wield.  The short-term survival of this group of friends, and even the possibility of their reaching adulthood, is threatened by great evil.  But the earth is newly young—and there is room enough in it for those children who work together, and who realize the profound value of friendship.  The two oldest, Jem and Clare, discover too that out of friendship can come love.  The Garden of Darkness is innovative, with deeply rounded characters and a moving and fluid writing style that respects the young adult reader.  A précis follows.

The Garden of Darkness
Précis

In The Garden of Darkness, a novel for young adults, the virus SitkaAZ13, better known as “Pest,” has wiped out most of the children and all of the adults on earth—with the exception of one mysterious grownup. This book chronicles the physical and psychological journeys of two of the surviving children, a fifteen year old girl, Clare, and a thirteen year old boy, Jem, as they join others and begin to navigate the perils of the post-apocalyptic landscape. Clare and Jem make an odd pair:  before Pest, Clare was a cheerleader, while Jem was president of the chess club.  Once Clare, Jem and other orphaned children band together and try to rebuild their lives, they begin a journey to find the only remaining adult.  They are hurried by the discovery that the scourge they call “Pest” is not gone, that with the onset of adolescence, the disease returns to take the almost-grown.  Eventually they find the adult they hope will cure them, organize them, redeem them—or does this grownup have something else in mind?  In the final accounting, Clare and Jem realize that, ultimately, they must save themselves.  In that fight for survival Jem and Clare discover that the greatest weapon they can wield against the evil left in the world is friendship.  And that, out of friendship, can come love.

Oh, this book. This book, this book, this book. Post-apocalyptic YA is usually just something I read for funsies, but I had to stay up last night until I'd finished this one. It wasn't the story--kids survive in a world where disease has wiped out all of the adults--but the writing. Most YA uses fairly simple, straightforward prose in telling its story, with the occasional descriptive passage used to point to something that will be Very Important to the Plot. This book, however, seemed to relish language; to use it to full effect to build mood and character. Every character had a distinctive voice, a distinctive way of speaking, which made them clear on the page. Each change of circumstance was rendered clearly, with the panic of the early part of the book giving way to the fear and loneliness of the middle, then on to the companionship, love and hope of the latter part. I really wish I could explain this better or that I had been smart enough to copy down some of the phrases and sentences that particularly stood out for me, but, alas, no. I will say, though, if you haven't read it yet, to give it a try when you have a chance. Like I said, there's nothing earth-shatteringly original about the plot, but the writing itself elevates this book far above the rest of the heaping pile of post-apocalyptic YA.

This novel was completely compelling, and the only reason that I didn't finish sooner is that the book kept disappearing—my husband or 19-year-old daughter would sneak off with it, so there were three bookmarks in it. But even when I wasn't reading, I was thinking about it--and luckily not just about the disturbing evil of one of the characters. It made me think about what's important, what is valuable, how to enjoy each moment with the people I love, what to say and do that will make them look back and remember it fondly and helpfully, not sadly or as if it was all pointless. The characters were real and alive, and I especially cherished the ways that they interacted with each other.

The sentences in this book are so crisp and right, "We didn't know anything that bad could happen," for one. I love an early paragraph where the author describes the way a generator can fix electricity, but when Google and the internet disappear, it's all so different. I love/hate/understand/even identify with/and fear Marie-types. And I love/hate the way the pediatrician gets his candy bar. And I love the way that Clare thinks about the basket outlet. And I’m grateful for the "Bad dog" scene. (ETC)

I’m reading Alan Weisman’s The World Without Us, too, which the New York Times called a “morbidly fascinating nonfiction eco-thriller” but The Garden of Darkness describes that world so much better.

A Customer Review from Amazon.com, 2014