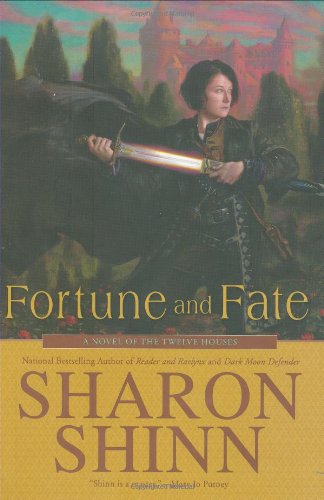 Fortune and Fate
Sharon Shinn
Plagued by guilt for failing to protect her king, Rider Wren has fled the city of Gilengaria and given herself the penance of a life of wandering, helping strangers in need. But when chance brings her to the great estate known as Fortune, Wren will find her fate, and finally confront the ghosts of her past.
1 Vote

The former Rider Wen has a decisively shady past. When she fails to protect her king, the ruler of the kingdom of Gillengaria, she is weighed down by guilt of her supposed failure. She flees the royal city and decides to punish herself by simply wandering around and helping those in need. Then, an unexpected event occurs. She rescues a girl named Karryn, who'd been abducted by a not-so-charming suitor. Karryn happens to be the daughter of one of the men that rose against the king, the king that Wen failed to protect.