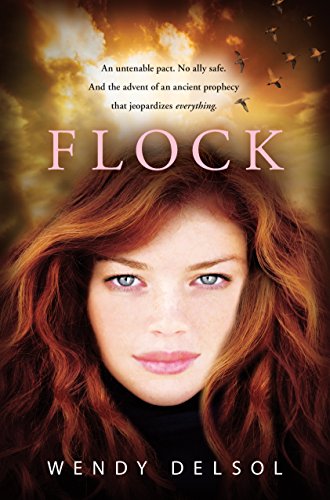 Flock
Wendy Delsol
The climactic conclusion of a supernatural romantic trilogy starring a savvy, sharp-tongued heroine who taps into ancient Norse secrets.After surviving her (shall we say) intense adventure in Iceland, Katla is psyched to be back for a blissfully uneventful senior year of homecoming and fashion explorations. But her hopes of dodging unfinished business are dashed by the arrival of two Icelandic exchange students: Marik, an oddly alluring merman-in-disguise, and Jinky, a tough gypsy girl. It seems Katla not only enraged the Snow Queen by rescuing her boyfriend, Jack, she also was tricked into promising her frail baby sister to the water queen — and Marik has come to collect. What’s worse, Katla doesn’t dare confide in anyone lest she endanger them, so even her soul mate, Jack, is growing suspicious. And now Katla’s stork dreams, her guide for matching babies with mothers, have become strange and menacing as well. Hold on for a thrilling finale as the heroine of Stork and Frost calls on her wits (and her wit) to protect those she loves and face a final mythic disaster.
1 Vote

Katla Leblane is hoping for a normal senior year after everything that happened in Iceland in her junior year. When two unexpected foreign exchange students show up at her school, she realizes that this year is going to be anything but normal. One exchange student is a shaman in training named Jinky, the other, a merman named Marik. Kat will be put to the test to find out what she’ll do to save her baby sister, whom she was accidently tricked into promising to give to the Water Queen.