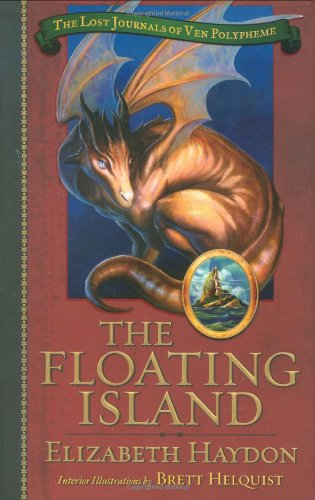 The Floating Island
Elizabeth Haydon
Long ago, in the Second Age of history, a young Nain explorer by the name of Ven Polypheme traveled much of the known and unknown world, recording his adventures. Recently discovered by archaeologists, a few fragments of his original journals are reproduced in this book. Great care has been taken to reconstruct the parts of the journal that did not survive, so that a whole story can be told...Charles Magnus Ven Polypheme--known as Ven--is the youngest son of a long line of famous shipwrights. He dreams not of building ships, but of sailing them to far-off lands where magic thrives. Ven gets his chance when he is chosen to direct the Inspection of his family's latest ship--and sets sail on the journey of a lifetime. Attacked by fire pirates, lost at sea and near death, Ven is rescued by a passing ship on its way to the Island of Serendair. Thankful to be alive, little does Ven know that the pirate attack--and his subsequent rescue--may not have been an accident. Shadowy figures are hunting for the famed Floating Island, the only source of the mystical Water of Life. They think Ven can lead them to this treasure, and will stop at nothing to get it--even murder. In a narrative that alternates entries from his journals and drawings from his sketchbooks, Ven begins the famous chronicles of his exciting and exotic adventures--adventures that would later earn him renown as the author of The Book of All Human Knowledge and All the World's Magic.
1 Vote

The Floating Island begins the telling of the story of Ven Polypheme, son of a shipbuilder, and member of a race that typically dwells below groud, the Nain. Ven is not the typical Nain, even in his family. He doesn't want to build ships; he wants to sail them all over the world. When is chosen to Inspect the family's latest ship, he is ecstatic. His father's ships are the best, and he never imagines anything could go wrong. Ven never dreams that his ship will be attacked by the notorious Fire Pirates and destroyed...But that is exactly what happens.