The Flame in the Mist 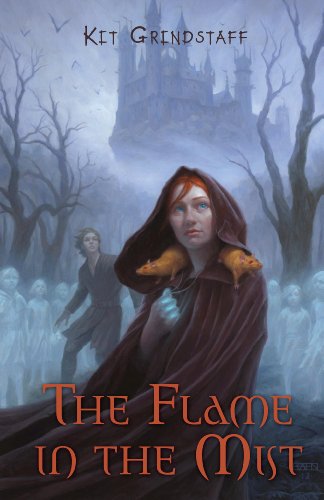 The Flame in the Mist
Kit Grindstaff
Set in an imagined past, this dark fantasy-adventure is for fans of Philip Pullman's The Golden Compass. Features  Jemma, a fiery-headed heroine held captive in Agromond Castle, yet destined to save mist-shrouded Anglavia.Fiery-headed Jemma Agromond is not who she thinks she is, and when the secrets and lies behind her life at mist-shrouded Agromond Castle begin to unravel, she finds herself in a chilling race for her life. Ghosts and misfits, a stone and crystals, a mysterious book, an ancient prophecy—all these reveal the truth about Jemma's past and a destiny far greater and more dangerous than she could have imagined in her wildest fantasies. With her telepathic golden rats, Noodle and Pie, and her trusted friend, Digby, Jemma navigates increasingly dark forces, as helpers both seen and unseen, gather. But in the end, it is her own powers that she must bring to light, for only she has the key to defeating the evil ones and fulfilling the prophecy that will bring back the sun and restore peace in Anglavia.
1 Vote

Tweet
The Flame in the Mist review by Rainbow Shard

Jemma lives in a castle.  It’s not a life of luxury, however.  Her family, the Agromonds, are the rulers of a kingdom ravaged by the Mist, which blocks out all light.  The people of this land have not seen the Sun for generations.  The Agromonds relish this darkness, and love all things disturbing and cruel.  Jemma does not fit in.  She knows she should enjoy the thought of creating a new spell each week, should love the rage and fury of storms, should feel strengthened by the summoning of dark entities, but it’s all opposite.  She never bother

This book is intended for ages 9 and up.