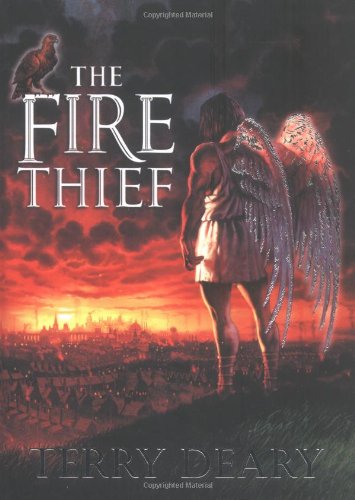 The Fire Thief
Terry Deary
International best-selling author Terry Deary reinvents the myth of Prometheus, the Titan who stole fire from the gods and gave it to the human race. To escape the gods' revenge, Prometheus travels through time to a murky metropolis called Eden City. There, he befriends a motley assortment of comic characters and learns what humans have done with his gift of fire. Enter our narrator: Jim, a young orphan, actor, aspiring novelist, and petty criminal who rids the wealthy of their worldly possessions. With the help of Jim, Terry Deary masterfully interweaves two plots, with the action jumping at a whirlwind pace from Mount Olympus to the seedy taverns and elegant mansions of Victorian Eden City. Prometheus has a soft spot for humans in need, but using his powers to get his new friends out of trouble will betray his hiding place to the gods! Using humorous footnotes, shameless puns, and literary references to everyone from Dickens to Poe, Terry Deary has created an original work that will have readers laughing out loud.
1 Vote

This book begins with Prometheus (yes the Greek Titan) escaping his bonds of captivity. Then he flies two million years into the future (around 1858) trying to escape the fury of the gods. In this future he meets a boy and his uncle. Jim, the boy, is an orphan that Edward, the uncle, adopted. They are actors (and thieves) whom befriend Prometheus. Will Prometheus be able to escape the wrath of the gods? Will Jim and Edward be able to help him? Find out by reading Fire Thief.