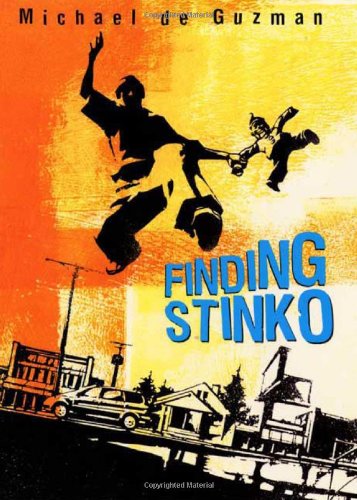 Finding Stinko
Michael de Guzman
Newboy hasn’t spoken in three years. One morning he opened his mouth and nothing came out. He doesn’t know why he stopped talking, but what he does know is that he’s through with the state child-care system. In twelve years he’s lived in eleven foster homes, and the Knoxes are the worst of the bunch. Now, with no voice, no family, and no exact plan, Newboy is running away for good. Living on the streets means danger and excitement around every corner, but the one thing Newboy never expected to find is a companion in the form of an old ventriloquist dummy lying in a Dumpster – a puppet with no hands, backward feet, and a chunk of its nose missing. Amazingly, this beat-up doll whom he dubs “Stinko” possesses a kind of magic that helps Newboy rediscover his ability to communicate. This is a fast-paced adventure about a runaway kid figuring out not just what he’s searching for but also what he has to say. Finding Stinko is a 2008 Bank Street - Best Children's Book of the Year.
1 Vote

From the time Newboy was one week old, he had been living in the state child care system. He had lived in 11 houses in 12 years, and, to make matters worse, when he was nine years old he stopped talking. It wasn't his fault, he just opened his mouth one day and nothing came out. The school he went to labeled him difficult and stubborn, so no one wanted to adopt him, or even keep him in their house, which is how he came to live with the Knoxes. They were the worst foster parents he'd ever had, so Newboy dedided to listen to his instincts.