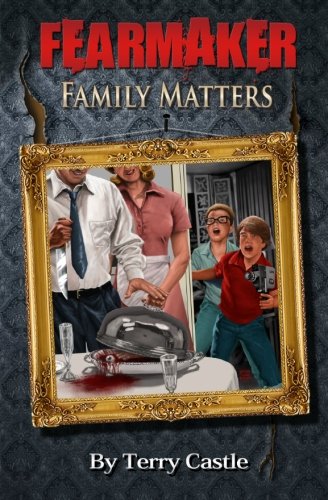 FearMaker: Family Matters
Terry Ann Castle
Twelve-year-old Adam Castle lives in a mansion in Beverly Hills. But for him, life is just like that for any other ordinary twelve-year-old. That is, until he mistakenly overhears the unsavory truth about his father. Dear old Dad is a homicidal maniac and lovely Mom is his beautiful accomplice. To make matters worse, Adam overhears a sweet little conversation where he learns that his dad’s next victim will be one of his favorite classmates, Jennifer Isles. Jen is the first girl Adam has ever really liked, I mean got-caught-staring-at-her-more-than-once liked. And his father has plans to kidnap her and bury her alive until a ransom is paid. It seems that Jen’s pretty little head will be whacked off by his loving father, if Mr. and Mrs. Isles don’t go along with his Dad’s maniacal plan. Adam’s ordinary life just took on a demented twist as he steps into the wonderful world of the macabre. Together with his best friend, Julian, the two boys know they have but one choice. They must stop the murder from happening. As they race against time and evil forces, Julian and Adam embark on a murder mystery tour of Los Angeles that would make Edgar Allen Poe shake with terror. The final bit of proof the two sleuths need lies in the bottom of an empty grave at Forever Hollywood Cemetery. Is Adam brave enough to climb into the empty abyss of death and claim the evidence they need to stop his father forever? If he is that brave, what will happen when he descends into the desperate pit of fear? This is a tale so bizarre that it proves that truth is stranger than fiction. It could only have been written by a grown-up kid who grew up in world of horror, in a big house in Beverly Hills, with a real-life dad who made his living scaring the wits out of innocent souls.
1 Vote

Adam Castle is twelve years old and lives in Beverly Hills, California. This is the story of how his world turns upside-down. Adam has never known exactly what his mom and dad's jobs are, all he knows was that they are rich. After overhearing a conversation between his parents, Adam suspects that there is more to his dad's job than he has revealed. When Adam overhears more conversations, he suspects his parents of foul play and murder. He discovers that his classmate Jen may be kidnapped and held for ransom. It's up to Adam and his best friend, Julian, to save their classmate.