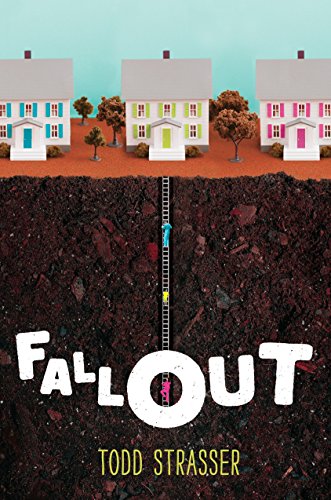 Fallout
Todd Strasser
What if the bomb had actually been dropped? What if your family was the only one with a shelter?Exciting, harrowing ... This is a superb entertainment ...  It  thrums along with finely wrought atmosphere and gripping suspense... -- THE NEW YORK TIMESA gripping and superbly constructed novel... There's not a word out of place in this evocative book. --- THE WALL STREET JOURNAL Strasser once again combines terrific suspense with thoughtful depth... This riveting examination of things important to a boy suddenly thrust into an adult catastrophe is un-put-down-able. --KIRKUS (starred review)An eye-opening "what if" scenario about the human response to disaster. --PUBLISHERS WEEKLY  (starred review) In the summer of 1962, the possibility of nuclear war is all anyone talks about. But Scott's dad is the only one in the neighborhood who actually prepares for the worst. As the neighbors scoff, he builds a bomb shelter to hold his family and stocks it with just enough supplies to keep the four of them alive for two critical weeks. In the middle of the night in late October, when the unthinkable happens, those same neighbors force their way into the shelter before Scott's dad can shut the door. With not enough room, not enough food, and not enough air, life inside the shelter is filthy, physically draining, and emotionally fraught. But even worse is the question of what will -- and won't -- remain when the door is opened again. Internationally best-selling author Todd Strasser has written his most impressive and personal novel to date, ruthlessly yet sensitively exploring the terrifying what-ifs of one of the most explosive moments in human history.
3 Votes

Fallout by Todd Strasser is about a boy, Scott, who is constantly afraid of when the Russians will attack. His father builds a bomb shelter and everybody, including his best friend Ronnie, is assuring Scott it will be ok. People think Scott's family is crazy for building the shelter. That is, until a bomb actually does drop.

What's this?
Fallout review by alphatauri

What if, in a stunning change in history, the nuclear bomb had actually been dropped? What if mutually assured destruction had actually taken place? And what if your family had the only protection from it? When the bomb hits, Scott and his family descend down into their fallout shelter. But before they can shut the door, the neighbours who laughed at their construction of a shelter rush in. WIth not enough food nor space, they must survive for two weeks underground.

What's this?
Fallout review by moseso

Fallout is a book set during the Cold War time period. In the summer of 1962 the possibility of a nuclear war is all anyone ever talks about. Scott’s dad is building a fallout (an underground bomb shelter) to protect his family. But there’s a catch, Scott’s dad is the only one in town that is building a fallout! Then the unthinkable happens and neighbors force their way down into the shelter. With hardly any food, and no fresh air, how will they survive? And when they emerge, what will be left of the world they've always known?