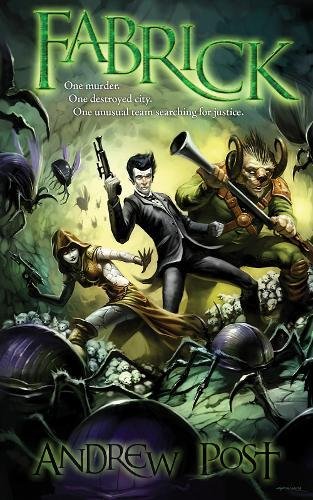 Fabrick
Andrew Post
Clyde has worked for Mr. Wilkshire for a very long time. Life is comfortable in his keeper's chateauuntil Mr. Wilkshire is attacked. Clyde goes into hiding and emerges to find his only friend dead. Brokenhearted and clueless how to bring Mr. Wilkshire's killer to justice, Clyde accepts the help of a unique group of friends, including Flam the Mouflon treasure hunter and Nevele the royal stitcher. Throughout their adventure, Clyde learns he isn't alone in this world with his magical ability: there are others like him called fabrick weavers, and for all it is both a special gift and a curse. His gift is to ease the conscience of anyone who makes a confession to him, but the curse is that the person’s luck will be reduced in proportion to the severity of the offense. Having left his pampered life behind to set things right, Clyde joins his new friends traveling into the razed city of Geyser, into the labyrinthine world beneath, and to the palace beyond. Along the way, the group deals with an unrelenting maniac pursuer, a corrupt king, a band of pirates, a small army of guardsmen, and just a few million dog-sized bugsall while hopefully managing to avoid jinxing their own members. Yeah, no problem.
3 Votes

This book is called Fabrick, it's about a man who is a servant and his world is completely changed in just 6 months. The main character's name is Clyde, he is a servant. Clyde's world is changed when he meets a certain and they go on an adventure to find out the biggest mystery he has ever known. He runs into many problems, but those won't stop him from reaching his goal.

What's this?
Fabrick review by Raj the Russian Elephant

The book starts out with a slave named Clyde. He is in his Master's yard when the table explodes. He tells Clyde to hide for three weeks. Clyde looks back and sees some mysterious men around his master. He hides in the cellar for six months. When he comes out he sees a seven foot hairy thing with horns and a pug face. He makes a deal to go avenge the master when they get hit with bad luck left and right. Have fun!

What's this?
Fabrick review by emma365

Fabrick is a story that begins with a slave named Clyde who has known nothing but his masters' homes for his entire life.  When Clyde's current master dies, he is subjected to his naiveté in a world that he has never known.  A looter 'Mouflon' by the name of Flam came to the remains of Clyde's master's home only to be confronted by the servant with an exceptional ability with heavy consequences and lackluster knowledge of anything other than household care.