Extracted (The Lost Imperials Book One) 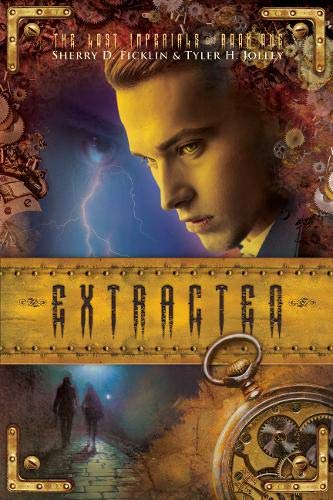 Extracted (The Lost Imperials Book One)
Sherry Ficklin
Welcome to the war. The Tesla Institute is a premier academy that trains young time travelers called Rifters. Created by Nicola Tesla, the Institute seeks special individuals who can help preserve the time stream against those who try to alter it. The Hollows is a rogue band of Rifters who tear through time with little care for the consequences. Armed with their own group of lost teens--their only desire to find Tesla and put an end to his corruption of the time stream. Torn between them are Lex and Ember, two Rifters with no memories of their life before joining the time war. When Lex's girlfriend dies during a mission, the only way he can save her is to retrieve the Dox, a piece of tech which allows Rifters to re-enter their own timeline without collapsing the time stream. But the Dox is hidden deep within the Telsa Institute, which means Lex must go into the enemy camp. It's there he meets Ember, and the past that was stolen from them both comes flooding back. Now armed with the truth of who they are, Lex and Ember must work together to save the future before the battle for time destroys them both again.
3 Votes

Tweet
Extracted (The Lost Imperials Book One) review by fire_galaxy

This book is mainly based on the life of a Rifter named Lex in the group The Hollows. The Hollows train young travelers, called Rifters, to go through time without even caring about consequences. The only other time travel group, The Tesla Institute, is against this way of traveling through time without care and do anything to stop The Hollows. When Lex’s girlfriend dies on an assignment, he will do anything to get her back, even if it includes breaking into The Tesla Institute to get a special piece of tech that makes sure he doesn’t collapse time.

What's this?
Extracted (The Lost Imperials Book One) review by cshattan

Lex and Amber are two Rifters (time travelers) with no knowledge of each other or what their lives were like before they were pulled into the time-traveling world.  Lex is part of the Hollows, a band of scruffy Rifters whose mission is to stop the Tesla institute at all cost.  Amber is a student at the Tesla Institute, run by the famous (or infamous?) Tesla.  Their goal is to preserve the time stream, or so Tesla claims.  But as Amber and Lex embark on journeys that lead them to each other, they will learn things that will change their

What's this?
Extracted (The Lost Imperials Book One) review by jotaf