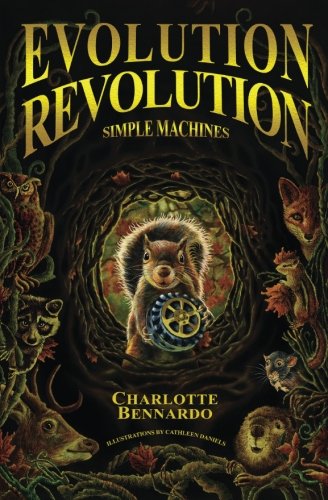 In a quiet wood, a gray squirrel declares war on the machines that invade his wood, threatening his nest and tree. Taught words and how to use simple machines like the wheel by a young boy who names him Jack, the squirrel shares what he's learned with the other animals. Jack thinks he can stop the bulldozers, if he can convince the other woodland animals to join him in the fight. But as they take on the humans and their machines, people are noticing that Jack and his friends are smarter than ordinary forest animals. All of them are in more danger than they realize. Even if Jack and the animals win the battle, will they lose the war? Evolution Revolution is a smart and charming book for younger readers that will have them wondering just what the animals in the yard are up to! Watch for the next book in this series coming soon.
3 Votes

Evolution Revolution: Simple Machines is a story of a highly intelligent squirrel, Jack, and his mission to save his forest. Machines have been cutting down trees across the road from Jack's home for weeks. One day the machines cross the road and start taking down Jack's forest. Jack must think of a way to save his forest and all his friends. He meets with a friendly human in a wheelchair and learns that the wheels in the big, scary machines can be stopped by jamming rocks in them.

Simple Machines narrates the story of Jack, a brilliant squirrel who tries to save his forest from destruction.

The construction machines are always working. Always destroying. Always moving closer and closer to Jack’s home. Even as they inch closer, the forest animals hold out hope that they will stop before hitting their home. When the machines get too close, however, Jack decides to take action against them.