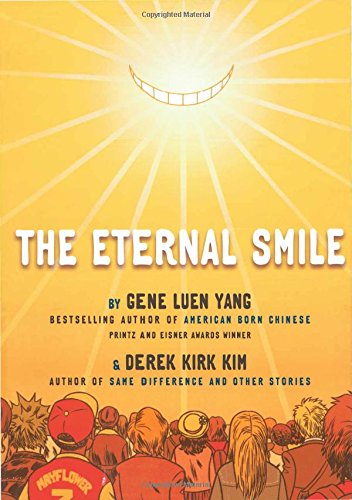 The Eternal Smile
Derek Kirk Kim, Gene Luen Yang
Gene Luen Yang is the National Ambassador for Young People's Literature and is a MacArthur Fellow, a recipient of what's popularly known as the MacArthur "Genius" Grant.A fantastical adventure through the worlds we live in and the worlds we create. From two masters of the graphic novel--Gene Luen Yang (American Born Chinese) and Derek Kirk Kim (Same Difference and Other Stories)--come three magical tales.The story of a prince who defeats his greatest enemy only to discover that maybe his world is not what it had seemed.The story of a frog who finds that just being a frog might be the way to go.The story of a women who receives an e-mail from Prince Henry of Nigeria asking for a loan to help save his family – and gives it to him. With vivid artwork and moving writing, Derek Kirk Kim and Gene Luen Yang test the boundaries between fantasy and reality, exploring the ways that the world of the imagination can affect real life. The Eternal Smile is the winner of the 2010 Eisner Award for Best Short Story.
1 Vote

Come fly into these three graphic novels in only one book! Meet Duncan, he's charming and brave and also the princess's favorite. Is he enough to go get the frog kings head and win the princess and her kingdom? Then there is Gran'pa Greenbax, a greedy old frog, longing for a pool full of gold. When a peculiar smile appears in the sky, will it satisfy him? Or will it lead to more greed? Finally, there is Janet; her nine to five life spins when she gets a romantic email from a Nigerian prince. She is chosen to liberate his family fortune; all he needs is her bank account.