Enter the Realm of Flesh 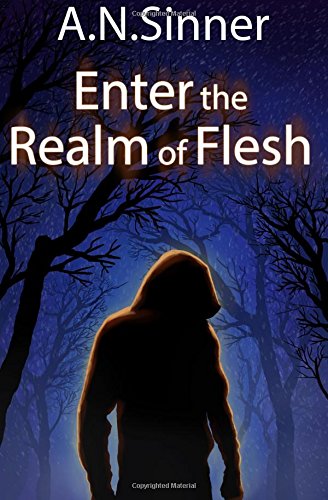 Enter the Realm of Flesh
A.N. Sinner
"The blade seemed to cut the air itself apart. Before he could stop, he had created a strange, ineffable crack in the air. Then, an arm reached through ... and shortly afterwards, a body followed." Michael Phoenix is just your ordinary misfit teenager. He lives in a New England small town, his father ran off a year ago, and he falls asleep in school every now and then. However, one night, Michael accidentally opens a portal to another world, and an alien creature invades his home. All he thought he knew about the world is shattered when he is plunged into a world of darkness, a world that's strange and alien--a world that once was home to him. Michael embarks on a journey to the darkest corners of the Earth in search for purpose, home, and vengeance. He is ready to do all it takes, even if he must go to the source of his nightmares--even if he must enter the Realm of Flesh. Along the way, he gains supernatural abilities and learns to cope with loss. A horror journey that ramps up towards a climactic showdown in the end. There's gore, twists, and violent action galore in this dark coming-of-age story. By the end of the day, each of the three main characters will have shed their fair share of blood and learned their lesson--if they live to see the end of the day.
2 Votes

Tweet
Enter the Realm of Flesh review by snehayamsani

Michael Phoenix was a typical teenager who liked to sleep, play video games, and listen to music. He lived a normal life with his mom. Michael’s dad, on the other hand, lived a life far from normal. Then everything changed.

What's this?
Enter the Realm of Flesh review by JesusFreak

Teenager Michael Phoenix has been waiting a long time for his father, Johnny, to return. However, when his father’s friend, Lukas, arrives on Michael’s doorstep, bringing news of his father’s demise, everything changes.