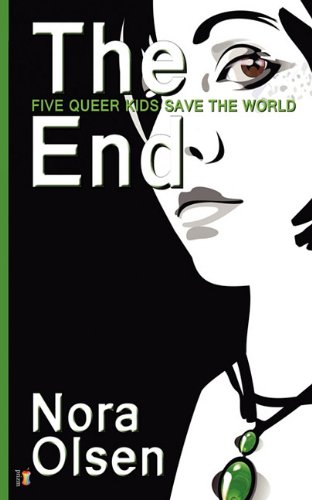 The End
Nora Olsen
When World War Three breaks out, seventeen-year-old Julia is on a school trip to Amsterdam, while fourteen-year-old Marly is trapped in a prison for delinquent girls. They both discover magical amulets, and try their best to save themselves and those around them. But it looks like their best will not be enough, as nuclear war threatens the survival of the human race. On her journey home to New York, Julia is joined by three other queer teens and the mysterious and alluring Ginger; lipstick lesbian Vikki; and five-thousand-year-old Skilly, who has an amulet that grants him eternal life. When Julia and Marly meet, they are immediately attracted to each other. But romance has to take a back seat as the five friends learn the true powers of the amulets. Can they travel through time to save the world from total destruction?
1 Vote

The End by Nora Olsen is about five kids that have all come together by one strange thing, a magical amulet from mystical gods who want them to save the world because of a nuclear war. They have to learn to protect themselves from nuclear radiation all while figuring out to travel back in time. The pressure of saving the human race is on them. Will they be able to handle the pressure and save the world?The book is an adventure because they have to travel to all different parts of the world to find everybody who has a magical amulet.