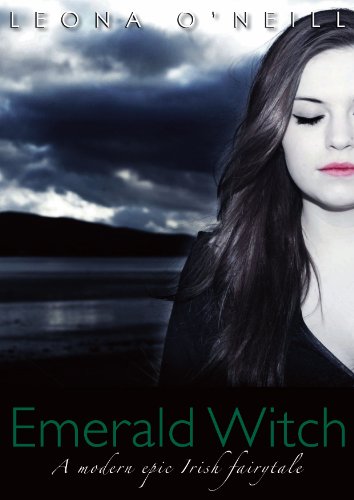 Emerald Witch
Leona O'Neill
If Amelia Morgan’s life were a colour it would be positively beige. Her love life is as real as the cheap plastic heart her boyfriend gave her for Valentine’s Day, nothing of note has ever happened in the sleepy seaside town where she lives with her eccentric grandmother and she is a level-seven hypochondriac.Things pick up though, before her 18th birthday, when her boyfriend drops off the face of the earth, the rate of human combustion in the town goes stellar and a maniacal stranger purporting to be her long-lost father starts hanging around town melting people.It turns out Amelia Morgan is a witch, hidden in wild and windy Donegal by her mother’s people when she was just a baby. She is daughter to a mad man and granddaughter to the ancient Celtic Goddess of war, death and destruction ­­– the Morrigan.As she comes of age the magical ties that bind the powers within her unravel, along with deep, dark family secrets. As her world implodes a war erupts within her between good and very, very bad. She leaves the beige-coloured existence behind to fight a battle of epic proportions - encountering headless horsemen, dark angels, power-crazed goddesses and her deadbeat Dad who requires her blood to raise his corpse mother from the grave.She discovers magical worlds - under the streets of Dublin, under the Emerald Lake, beneath the Emerald Forest and races of ancient Irish people who she must lead out of the darkness the Morrigan spreads across the land.No one said being a teenager was easy.
1 Vote

Living with her Grandmother Grace in a small Irish town resides the stories main character, Amelia. The book follows Amelia as she must abandon her human life to embrace a newfound discovery; she is the last in the line of the Emerald Witches. With her mother deceased, and her father-a dark and infamous wizard- out for her blood to complete a nefarious spell, it is Grace who must help her survive and harness her new powers. The pair is accompanied by throng of magical defenders willing to put down their lives in order to save Amelia and stop her wicked father.