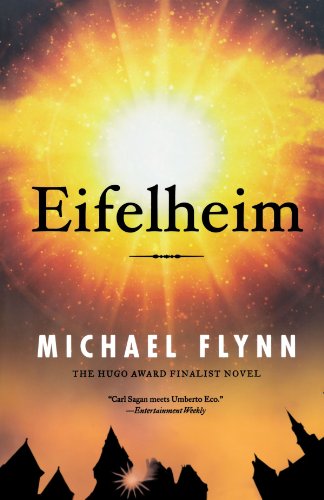 Eifelheim
Michael Flynn
The alien world of medieval Europe lives again, transformed by the physics of the future, by a winner of the Heinlein AwardOver the centuries, one small town in Germany has disappeared and never been resettled. Tom, a historian, and his theoretical physicist girlfriend Sharon, become interested. By all logic, the town should have survived. What's so special about Eifelheim? Father Dietrich is the village priest of Eifelheim, in the year 1348, when the Black Death is gathering strength but is still not nearby. Dietrich is an educated man, and to his astonishment becomes the first contact person between humanity and an alien race from a distant star, when their ship crashes in the nearby forest. It is a time of wonders, in the shadow of the plague. Flynn gives us the full richness and strangeness of medieval life, as well as some terrific aliens. Tom and Sharon, and Father Deitrich have a strange destiny of tragedy and triumph in Eifelheim, the brilliant science fiction novel by Michael Flynn.
1 Vote

Tom Schwoerin is annoyed. He is a historian with a problem. According to a certain pattern, old cities form a ring around the cities of today. Following this pattern, he discovers something wrong: a little town called Eifelheim. Eifelheim was inhabited, records show, but something happened around the fourteenth century so that Eifelheim was never inhabited again. Tom wants to find out what happened, so he goes on a search. The book switches to the year 1348; the main character is named Father Dietrich.