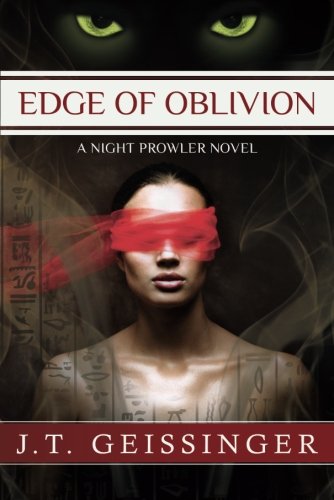 Edge of Oblivion: A Night Prowler Novel
J.T. Geissinger
2013 RITA® Finalist for Best Paranormal Romance A sensual, page-turning read that brings together two unlikely lovers in an explosive world of danger, beauty and supernatural forces. There exists a world beyond our own. It is a world of ancient magic and well-guarded secrets, of strict laws and harsh punishments for those who betray them, inhabited by the Ikati, a race of gifted people with unimaginable powers. It is here where two people with dark pasts meet. Morgan is beautiful, smart, sexy…and about to die. Convicted of treason against her shape-shifting kin, she is given one last chance at redemption; discover the hidden lair of the enemy intent on destroying every one of her kind, or forfeit her life. Xander is ruthless, heartless, cold-blooded…and assigned to kill her if she fails in her task. Expecting to feel nothing but contempt for the traitor under his watch, the assassin accompanies Morgan on her search, but as the two race through the heart of Italy while the clock winds down to zero hour, he finds himself drawn into a dangerous web of desire as powerful as it is forbidden. Their passion will test everything they believe in, and endanger the future of the tribe itself. Sensual, edgy, and action-packed, Edge of Oblivion is a must-read for lovers of dark paranormal romance in the vein of Laurell K. Hamilton and J.R Ward.
1 Vote

This book draws readers into the world of Morgan Montgomery, an Ikati shape-shifter, who can become a panther-like cat at will.  The story opens moments before her assigned death, a punishment for treason towards her people.  However, Morgan’s former ally, Jenna, the tribe queen, saves Morgan’s life, at least for a brief extent, by giving Morgan one last shot at redemption.  Jenna assigns her the task of locating, infiltrating, and destroying the Expurgari, a deadly, ancient enemy of the Ikati.  Unwillingly, Morgan is put under the care of Xander Luna, the Ik