The Dragon in the Sock Drawer 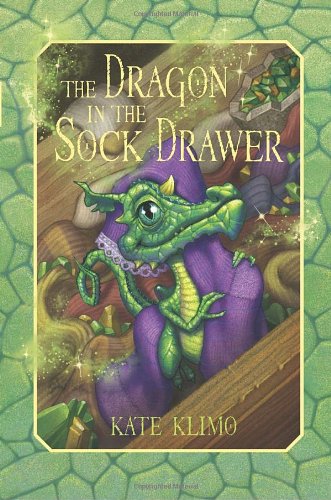 The Dragon in the Sock Drawer
John Shroades, Kate Klimo
For Magic Tree House readers who are ready for something longer, the Dragon Keepers series has the perfect length and reading level, along with the fast-paced writing, adventure, and sense of teamwork that kids love to read.TEN-YEAR-OLD COUSINS Jesse and Daisy have always wanted something magical to happen to them. So it’s a wish come true when Jesse’s newly found thunder egg hatches, and a helpless, tiny but very loud baby dragon pops out. Soon the two kids are at the dragon’s beck-and-call, trying to figure out what to feed her. An Internet search leads them to the library, which leads them back to the Internet, where they find a very strange Web site called “foundadragon.org.” It is here that the cousins discover that the dragon’s hatching has designated them “Dragon Keepers” and that not only do they have to feed her, but they have to keep her safe from the villainous Saint George who has kept himself alive over centuries by drinking dragons’ blood.
1 Vote

Tweet
The Dragon in the Sock Drawer review by SMax

The Dragon in the Sock Drawer by Kate Klimo is about two ten-year-old cousins that believe in magic. Jesse and his parents used to travel all over the place until he finally decided that he wanted to stay in one place. He and his cousin Daisy had always been close; both would read the same books of magic, dragons, hags, ect. So it was easy for him to go live with her and her parents. Daisy's dad is a geologist who studies rocks, so one day they were up on a local mountain looking for new rocks and that's when Jesse found a rock that talked to him.