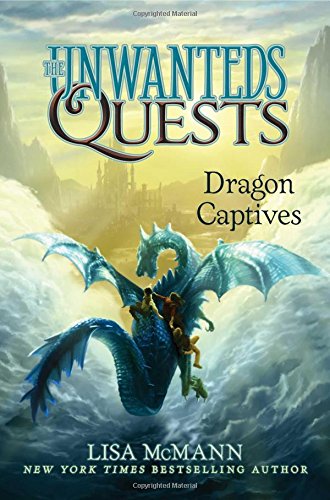 Dragon Captives (The Unwanteds Quests)
Lisa McMann
Ten years after Alex and Aaron Stowe brought peace to Quill and Artimé, their younger twin sisters journey beyond the islands in this first novel of a new sequel series to The Unwanteds, which Kirkus Reviews called “The Hunger Games meets Harry Potter.”Identical twins Fifer and Thisbe Stowe have amazing yet uncontrollable magical abilities. They’re naturally more gifted than even their brother, Alex, the head mage of Artimé, could hope to be. But when they accidentally use their magic in the jungle of Artimé to strike down a beloved creature, Alex is furious, and threatens to lock them away until they can learn to control their power. The threat is soon forgotten, though, when Hux, the ice blue dragon, comes to Artimé bearing the horrible news that his siblings have been enslaved by the notoriously evil Revinir, ruler of the dragon land. Seeking a chance to right their wrong and escape their brother’s wrath, Thisbe, Fifer, and their friend Seth sneak away to rescue the dragons from grave peril. Will their untrained abilities be enough to save the dragons—and themselves—when they come face-to-face with the Revinir?
1 Vote

This is the first book in a series that takes place a few decades after the original Unwanted series. Featuring old characters as well as new, it focuses mainly on the twin sisters, Thisbe and Fifer. Both have extreme power in magic yet are not very adept at controlling when it comes out and how, making them a danger to those living in Artime. Their older brother Alex is constantly restricting them from advancing in their magical training for fear that they will hurt somebody like they had done in the past.