Dragon Blade:The Book of the Rowan 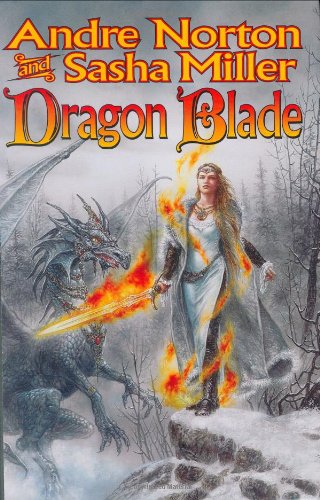 Over a year has passed since the defeat of the Great Foulness, and the ravaged earth has begun to heal. Lost for generations, the signet rings of the Four Great Houses---Oak, Yew, Ash, and Rowan---have been restored to their rightful heirs. And Ashen NordornQueen, mistress of the Land of Ever Snow, looks forward to a life of peace and happiness with her beloved husband and their newborn son---only to learn that an ancient evil still threatens all that she holds dear.The Mother Ice Dragon, the fearsome progenitor of her deadly breed, has awakened from slumber to menace the world anew. Legend holds that only the Dragon Blade, forged from the scales of her vanquished mate, can slay the deadly female dragon, but the Dragon Blade has been lost for ages.As Ashen embarks on a perilous quest to find the mystic sword, she leaves her castle and homeland in the care of her closest friends, including Rannore, Lady of the Rowan, who soon faces danger of a different sort....Dragon Blade continues the saga begun in To the King a Daughter and continued in Knight or Knave and A Crown Disowned.
2 Votes

Tweet
Dragon Blade:The Book of the Rowan review by MY

Nordon rulers Gaurin and Ashen have thought that the Great Foulness is over. However, when they get a present for their new son, they find out that they were wrong. The Ice Dragons they faced in the war were just babies, and the mother still lives. Gauring immediatly sets out to destroy the Mother Ice Dragon, hoping to find a certain sword that will help destroy her. After Gaurin leaves, Ashen finds new information about the Dragon Blade. She rides out to try and find him and give him this new piece of information. Meanwhile things back in Nordornlands aren't going to well.

What's this?
Dragon Blade:The Book of the Rowan review by SMo

Ashen NordornQueen and Gaurin NordornKing are enjoying peace at last, after the defeat of The Great Foulness, a mighty ice dragon. Their infant son has been crowned Bjauden NordornPrince, and though the land still has a lot of healing to do, things are looking on the bright side at last. Unfortunately, things are about to take a huge turn for the worse. When Ashen discovers a mysterious letter in the false bottom of one of her gifts, she realizes that the assault of the Ice Dragons is not over.