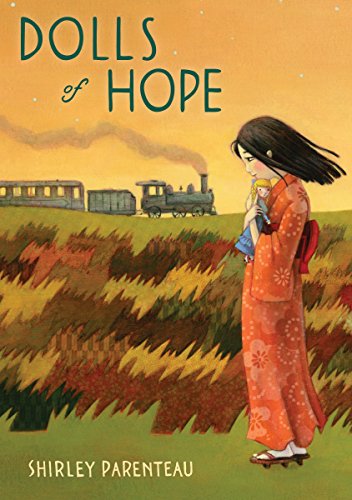 How daring is Chiyo prepared to be to keep the American Friendship Doll safe? Inspired by a little-known historical event, this engaging companion to Ship of Dolls is told from a Japanese girl’s point of view.When eleven-year-old Chiyo Tamura is sent from her home in a small Japanese mountain village to a girls’ school in the city of Tsuchiura, she never imagines that she will soon be in Tokyo helping to welcome more than twelve thousand Friendship Dolls from America—including Emily Grace, a gift to her own school. Nor could she dream that she’d have an important role in the crafting of Miss Tokyo, one of fifty-eight Japanese dolls to be sent to America in return. But when an excited Chiyo is asked to be Emily Grace’s official protector, one jealous classmate will stop at nothing to see her fail. How can Chiyo reveal the truth—and restore her own good name? In another heartwarming historical novel, the author of Ship of Dolls revisits the 1926 Friendship Doll exchange, in which teacher-missionary Sidney Gulick organized American children to send thousands of dolls to Japan in hopes of avoiding a future war.
2 Votes

Set in Japan, Dolls of Hope is an inspiring story about eleven-year-old Chiyo Tamura. After sneaking into her sister’s omiai, Chiyo is sent to a school for girls in Tsuchiura. As she tries to make friends and fit in, Chiyo learns of an upcoming singing competition in which the winners will travel to Tokyo and sing a song of welcome to the Friendship Dolls from America. Chiyo finds herself in Tokyo singing to the Friendship Dolls, but in a surprising turn of events, becomes one of the most popular girls in Japan.

What's this?
Dolls of Hope review by lovereading

Dolls of Hope is a compelling novel that mixes history with fictional characters. Chiyo Tamura is sent to a school in Tsushira, Japan, when she is thought of as not cultured enough. As soon as she arrives, she makes many friends, but also an enemy. Soon the word arrives that six girls are going to be sent to Tokyo to welcome the Friendship Dolls coming from America. Chiyo is one of them.