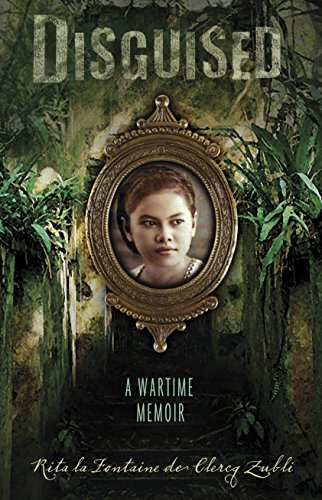 Disguised
Rita la Fontaine de Clercq Zubli
Told in her own words, here is the true story of a girl who posed as a boy during World War II — and dared to speak up for her fellow prisoners of war.With the Japanese army poised to invade their Indonesian island in 1942, Rita la Fontaine’s family knew that they and the other Dutch and Dutch-Indonesian residents would soon become prisoners of war. Fearing that twelve-year-old Rita would be forced to act as a "comfort woman" for the Japanese soldiers, the family launched a desperate plan to turn Rita into "Rick," cutting her hair short and dressing her in boy’s clothes. Rita’s aptitude for languages earned her a position as translator for the commandant of the prisoner camp, and for the next three years she played a dangerous game of disguise while advocating against poor conditions, injustice, and torture. Sixty-five years later, Rita describes a war experience like no other — a remarkable tale of integrity, fortitude, and honor.Back matter includes a glossary.
1 Vote

Rita la Fontaine a 12 year old Dutch-Indonesian resident living in the Dutch Indies had an incredible life. She writes her own true, breathtaking story. When the Japanese invaded their island, she and her family were informed that they had to leave their home and move to a prisoner of war camp. For fear of what the Japanese soldiers would do to a young girl for fun, Rita's father guided her to cut her hair and pretend to be a boy for the rest of the war. Rita transformed herself into Rick.