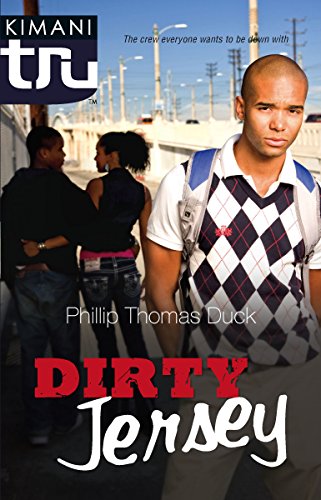 Dirty Jersey (Kimani Tru)
Phillip Thomas Duck
From zero to heroWhat's cool at Eric Posey's high school? A player's swagger, a baller's style, and game enough to catch every girl. Unfortunately, Eric is seriously uncool—unlike his popular sister, Kenya, who sings like an angel. But forget the choir; Kenya wants the fabulous life—bad boys and fly girls. A chance encounter with Fiasco, one of the hottest rappers around, gives Eric entr?into the world of the "Dirty Jersey" crew, where he's introduced to everyone and everything. Suddenly, Eric is cool and has access to anything he's ever wanted. Never mind that Fiasco isn't exactly a good guy— so what? But so what has a price. And Fiasco has just named it: Kenya.
1 Vote

Dirty Jersey by Philip Thomas Duck is a thrilling adventure about a high school boy named Eric Posey. Eric has no friends in high school and everyone makes fun of him. His sister, Kenya, is one of the popular girls in school. After Eric meets Fiasco, one of the coolest rappers, and becomes friends. Soon, he ends up joining Fiasco's crew and suddenly, he is the coolest kid in school and everyone wants to be his friend. But, Fiasco isn't exactly a good guy and what if he wants something in return for his friendship?