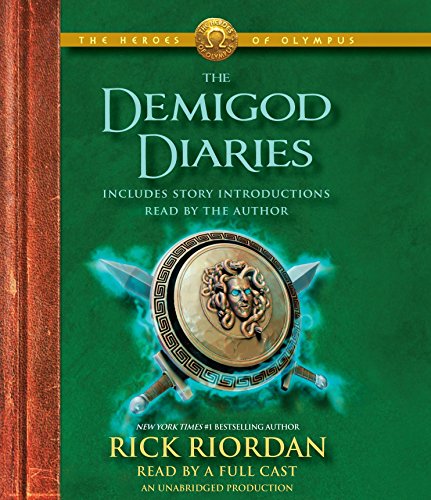 The Demigod Diaries (5 CD set audio book)
Various, Rick Riordan, Rick Riordan
Young Demigods,Your Destiny Awaits!You must prepare yourself for a difficult future: fighting monsters, adventuring across the globe, and dealing with temperamental Greek and Roman gods. You’ll join your favorite demigods from the Percy Jackson and the Heroes of Olympus series as they face dangerous foes and perilous tasks. What you learn from their experiences could very well save your life!
1 Vote

The Demigod Diaries is a companion novel to the Heroes of Olympus series. It contains four short stories. “The Diary of Luke Castellan” is about Luke and Thalia during their years on the run. “Percy Jackson and the Staff of Hermes” revolves around Percy and Annabeth’s messed up date. “Leo Valdez and the Quest for Buford” takes place during the time when Leo was busy building the Argo II. “The Son of Magic” is written by Rick Riordan’s son Haley, and it features the child of a minor goddess.

This book is on 5 compact discs (5 1/2 hours) from the Listening Library (www.listeninglibrary.com)