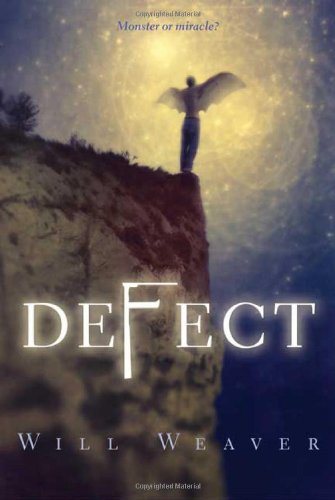 Maybe it was bad karma. Maybe it was just bad luck. Whatever the reason, fifteen-year-old David was born defective. His bug eyes, pinched face, and hearing aids are obvious, but there is a secret David keeps from everyone, even his foster parents. Because of a thin layer of skin hidden under each arm, David can fly--well, glide is more like it. Terrified of doctors, wary of letting down his guard, David is determined to hide his secret at any cost. But then David meets Cheetah, a girl whose own defect doesn't diminish her spirit, and suddenly his life begins to take wing.  In this arresting new novel, Will Weaver creates an unforgettable character on the path to discovering that some blessings can be a curse--and some curses a blessing.
2 Votes

David isn't like everyone else: he has bug eyes and he can fly. After pulling a prank on some of the mean kids in his school, he is sent to a school for gifted people... people like him. There, he meets a girl named Cheetah, who has epilepsy. Next, he meets a doctor who can make David look like a normal kid and offers his services. While thinking about his decision to go through with the surgery, David meets a boy named Brandon. Brandon has cancer and is going to die soon, so he tells David that he's a participant of the Make a Wish foundation.

What's this?
Defect review by HDan

This book is all about being different. The main character, David, was born different. Eventually, he gets fed up with all the teasing and decides to play a trick on his tormentors. He jumps off a cliff. They think he died, so theyre rather surprised when he walks into school the next day. What no one knows is that he has flaps of skin under his arms that enable him not to fly, but to glide like a hang glider. He is ashamed of his differences until he meets a girl named Cheetah. She makes him realize that the differences make us special.