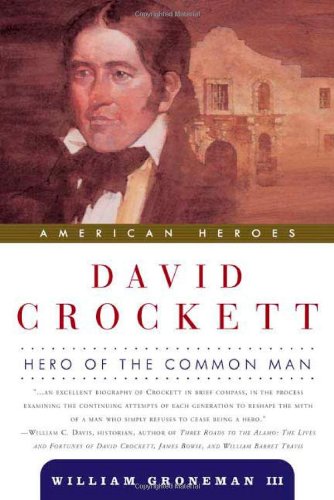 David Crockett: Hero of the Common Man
William Groneman
Perhaps no other figure in American history is more shrouded in myth and legend than David ("Davy") Crockett, the Tennessee frontiersman whose death at the Alamo in 1836 ensured his place in the Valhalla of American heroes.Crockett himself was responsible for much of the folklore about his life. A gregarious, fun-loving man, he was more than capable of spinning tall tales over a "horn" of liquor. The truth of his life, as William Groneman emphasizes in this book, was far more fascinating than the myth. David Crockett was a true self-made man who left home at the age of twelve. His adventures--hunting and exploring, serving as a soldier under Andrew Jackson in the Creek Indian War of 1813, a political career that took him to the United States Congress, an incessant search for "elbow room" that drew him to Texas-these were the real fabric of a heroic life.In writing of the "historical Crockett," Groneman, a world authority on the Alamo and its defenders, dispels the myths to uncover the genuine hero. He writes at length of the defense of the Alamo, describes how Crockett's reputation and heroism have been tainted by revisionist historians, and presents new evidence that the Tennessean actually left the Alamo during the siege to bring in reinforcements. Although safely outside the walls, he fought his way back in to rejoin his friends for the final, fatal, battle.
1 Vote

Another book in the "American Heroes" series, this one by William Groneman III, the narration walks the reader through the exploits of Davy Crockett, a man most Americans think of as the man in the coon-skin cap. The novel covers his lifespan in its entirety, additionally debunking popular myths about the man along the way. In sort of a "subtheme," Groneman also examines the number of times that Crockett almost died, implying a sort of luck and "invincibility" of this "American hero."