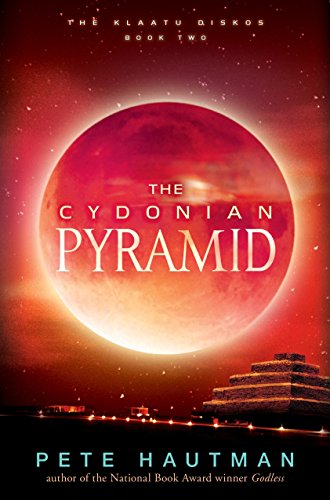 The Cydonian Pyramid
Pete Hautman
The much-anticipated sequel to The Obsidian Blade transports readers to the terrifying and thrilling world of Lah Lia, the enigmatic girl who changed Tucker Feye’s life.More than half a millennium in the future, in the shadow of the looming Cydonian Pyramid, a pampered girl named Lah Lia has been raised for one purpose: to be sacrificed through one of the mysterious diskos that hover over the pyramid’s top. But just as she is about to be killed, a strange boy appears from the diskos, providing a cover of chaos that allows her to escape and launching her on a time-spinning journey in which her fate is irreversibly linked to his. In this second volume of the Klaatu Diskos trilogy, Tucker Feye and Lah Lia each hurtle through time, relating their stories in alternating viewpoints that converge at crucial moments. Fans of the first adventure will be intrigued by the chance to see the world through Lah Lia’s eyes — no matter how disturbing the vision might be.
2 Votes

If you read the first book, then you know that you never had the pleasure of reading about Tuck's adventure in Lah Lia's point of veiw. In this book, the second one, you learn just how Tuck saved her from sacrifice and all about the society of the Lah Sept. Lah Lia then goes off on an adventure of her own back inside the society of the Lah Sept. Tucker also goes off on an adventure of his own, going to past, present, and future, just like Lah Lia's adventure. This book is an excellent time-traveling adventure just like the first one!

What's this?
The Cydonian Pyramid review by MezokaCapturer65