The Corps of the Bare-Boned Plane 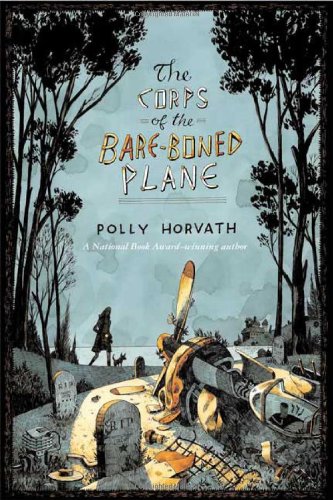 The Corps of the Bare-Boned Plane
Polly Horvath
When an accident leaves teenage cousins Meline and Jocelyn parentless, they come to live with their unknown and eccentric Uncle Marten on his private island. They soon discover that the island has a history as tragic as their own: it was once an air force training camp, led by a mad commander whose crazed plan to train pilots to fly airplanes without instruments sent eleven pilots to their deaths. Jocelyn, Meline, and Uncle Marten are soon joined on this island of wrecked planes and wrecked men by an elderly Austrian housekeeper, a very mysterious butler, a cat, and a dog. But to Jocelyn and Meline, being in a strange new place around strange new people only underscores the fact that the world they once knew has ended. Told in the alternating voices of four characters dealing with grief in different ways, Polly Horvath’s new novel is a rich and complicated story about loss and the possibility— and impossibility—of beginning again.  The Corps of the Bare-Boned Plane is a 2008 Bank Street - Best Children's Book of the Year.
1 Vote

Tweet
The Corps of the Bare-Boned Plane review by BDav

When Meline and Jocelyn are left orphaned in a train accident, they are both shipped off to live with their genius uncle on an island famous for its morbid history of airplane crashes. The two girls have completely conflicting personalities, and their uncle only exacerbates matters by ignoring them entirely. Life on the island is miserable for all involved-- that is, until one fateful day when a revelation occurs to Meline: "I know how to build a plane."