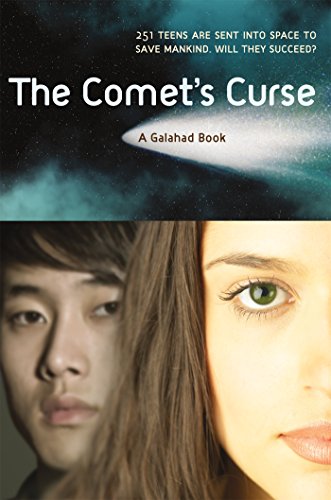 The Comet's Curse
Dom Testa
In the gripping start to this young adult science fiction adventure series by popular Colorado radio host Dom Testa, the teenage crew of the starship Galahad must find a new home for humanity among the stars--if they fail, it will be the end of the human race....When the tail of the comet Bhaktul flicks through the Earth's atmosphere, deadly particles are left in its wake. Suddenly, mankind is confronted with a virus that devastates the adult population. Only those under the age of eighteen seem to be immune. Desperate to save humanity, a renowned scientist proposes a bold plan: to create a ship that will carry a crew of 251 teenagers to a home in a distant solar system. Two years later, the Galahad and its crew―none over the age of sixteen―is launched.Two years of training have prepared the crew for the challenges of space travel. But soon after departing Earth, they discover that a saboteur is hiding on the Galahad! Faced with escalating acts of vandalism and terrorized by threatening messages, sixteen-year-old Triana Martell and her council soon realize that the stowaway will do anything to ensure that the Galahad never reaches its destination. The teens must find a way to neutralize their enemy. For if their mission fails, it will mean the end of the human race….
2 Votes

Space travel? Enemy aboard ship? The human race depending on you? These are only a few of the problems Triana Marshall faces as she pulls away from earth with 250 other teenagers- none over the age of 16- in her command. Their mission is to save Earth from the quickly spreading disease that the comet Bhaktul is causing, the result of which is death. Will the young adults succeed? Or will human life cease to exist as we know it?

What's this?
The Comet's Curse review by KBand

Traveling through space to save humanity, on a ship called Galahad, is not where Trina Marshall pictured herself at age 15. Especially not the leader of 250 other 15 year olds on the ship. Then when there is an unexpected enemy on board, can she handle it all, or will the ship wreck? Will they be able to get away from the disease, rapidly spreading that the comet Bhaktul is causing?