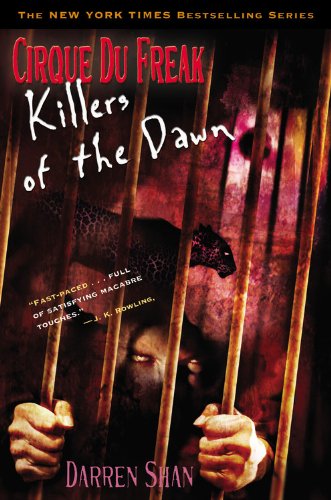 Outnumbered, outsmarted and desperate, the hunters are on the run, pursued by the vampaneze, the police, and an angry mob. With their enemies clamoring for blood, the vampires prepare for a deadly battle. Is this the end for Darren and his allies?
2 Votes

The newest book in the "Cirque Du Freak" series is more jaw-dropping than the last. Now Darren Shan and the other Vampaneze hunters are hot on the trail of the Vampaneze Lord when Darren's girlfriend, Debbie, is captured by R.V while in the sewers. Darren and the other Vampaneze must now escape the Vampaneze driven police and a mob who are ready to kill them, in order to save Debbie. They must also be successful in order to save the Vampires from the war between the Vampaneze and the Vampires. This, however, may cost more than Darren can handle.

What's this?
Cirque du Freak: Killers of the Dawn review by DF

After fleeing the sewers with there two hostages, Darren and his friends return to their hideout. Here they are confronted with the police who have them completely surrounded. Taken into custody they bide their time and escape so they can once again confront the Vampaneze Lord.