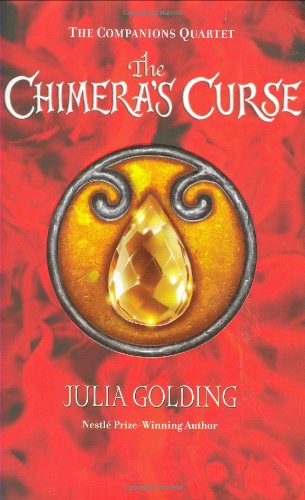 The Chimera's Curse
Julia Golding
Connie Lionheart is the only Universal Companion, able to communicate with all of the mythical creatures hidden in our world. She’s the most important member of the secret society sworn to protect the bonds between humans and creatures. But the shape-shifter Kullervo wants to use her power to wipe out humanity. Connie must stop him, but how? There are no simple answers in the exciting conclusion to this award-winning eco-fantasy series by a Nestlé Prize-winning author. "Come to the mark. Come to me. You know you must. Connie surfaced from sleep, struggling like a swimmer caught in weeds, thrashing to reach air. When she woke, she found the bedclothes twisted around her. She threw them off and sat up to gulp some water from the glass on her bedside table, her handshaking slightly. The voice had crept into her dreams again: the voice of Kullervo, the shape-shifter, her enemy—and her companion creature. He said the same thing each time, repeating the message again and again so that she could hear its echo during the daylight hours as well as in the stillness of the night. She knew where he wanted her to go: he wanted her to meet him at the mark he had made deep in her mind, the breach in the wall between her and his dark presence. But she would not give in to him."
1 Vote

Connie Lionheart is once again dealing with the stress and dilemmas of the magical society. Ever since the first book, Secret of the Sirens, Connie has been growing and strengthening to defeat the evil being, Kullervo. When Connie first found out that she was a Universal Companion, or able to communicate with any mythological creature, she had no clue what she was up against. Connie started to train with a rock dwarf in the earlier books, but Connie now finds herself learning different attacks on her own. She plans to use these attacks and weapons to defeat Kullervo.