The Chess Set in the Mirror 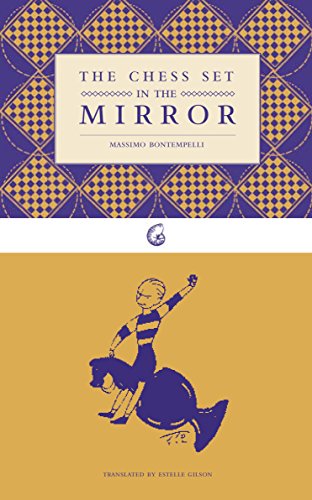 The Chess Set in the Mirror
Estelle Gilson, Massimo Bontempelli
"This whimsical Italian fantasy, originally published in 1922, belongs on the shelf next to The Little Prince and Alice and Wonderland. Simple language by translator Gilson gives the novel a poetic tone, while STO's charming black-and-white illustrations add humor."—VOYAAlone in a room with nothing but an old mirror and a chess set, a young boy anticipates a boring afternoon. But like Alice just before she fell down the rabbit hole—and wound up in Wonderland—this boy is about to embark on a marvelous adventure. Gazing at the mirror, he discovers that the chess pieces (the reflections, not the real ones) are alive! When the White King invites him into the world on the other side, the excitement begins. There, all the rules of the real world are reversed. There, you can have a perfectly reasonable conversation with a perfectly unreasonable chess piece. There, you can meet anyone who's ever looked into the mirror (even a hundred years ago). This bewildering experience leads to some odd questions: What goes on inside a mirror when no one is looking at it? What if the reflected world is more real than the one where we live? And speaking of our world, how will our hero get back to this side of the mirror?Join him on his fantastic journey where nothing is more absurd than reason or more important than freedom of imagination."[A] story told in a voice that's charmingly direct, sweetly self-referential…and more than a little trippy…Like all good books for children, it also has unusual insights into childhood itself: '…when you're ten years old, standing or sitting are exactly the same.'"—Philadelphia Inquirer"The narrator's dry wit, reminiscent of P. G. Wodehouse, makes for an appealing journey and, coupled with the whimsical pen-and-ink drawings, a charming package with a timeless air."—Publishers Weekly"Motherhood is the theme of these two intimate novellas by Italian writer Bontempelli, who preceded such better-known authors of 'magic realism' as Jorge Luis Borges and Alejo Carpentier by more than two decades in his fusion of the miraculous and the matter-of-fact…The elegantly restrained passion of these two tales, penned in Bontempelli's delicate prose, proves yet again the writer's literary genius."—Publishers Weekly (review of Separations)"Separations is a complete triumph. Bontempelli's work prefigured the magic realism popularized by many Latin American writers, andSeparations is an excellent example of this style. Elegant, superbly crafted, and masterfully written, these tales are not easily forgotten; the heroines are haunting and the plots finely honed. Bontempelli is truly a 'fantastic' writer."—Library Journal (review of Separations)A protégé of Pirandello, Massimo Bontempelli (1878–1960) was a prolific writer of poetry, plays, and prose fiction. Bontempelli now occupies a major place in 20th century Italian letters, and his works are translated in every major European language.Sergio Tofano, also known as STO, was an Italian illustrator, actor, director, and playwright. For fifty years his illustrated work appeared in the children's supplement of Corriere della Sera, one of the oldest and most widely read newspapers in Italy.Estelle Gilson's translation of Umberto Saba's Stories and Recollections won both the Italo Calvino and PEN Renato Poggioli awards, and the MLA's first Aldo and Jeanne Scaglione award in 1994 as the best literary translation of the previous two years. Her fiction, essays, and articles appear in many publications. She translated Bontempelli's Separations.
1 Vote

Tweet
The Chess Set in the Mirror review by LSpro

The book starts out with a bored young boy sitting in a room. He seems to be in punishment, and has received instructions to not break the mirror in the room, which otherwise only sports a chess set and a chair. Bored, he appears to begin daydreaming, or hallucinating, or actually dreaming, and the white king piece begins talking to him. Events lead into events, and very soon, he's in the mirror, talking to the chess pieces, his mysteriously young grandmother, and a thief.