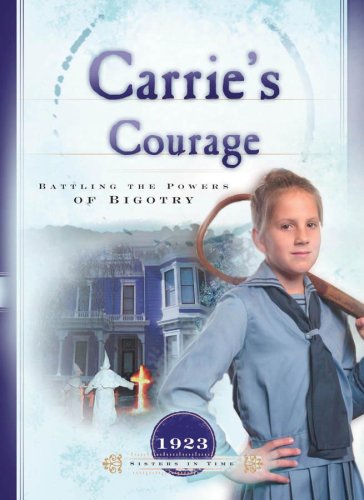 Carrie's Courage: Battling The Powers Of Bigotry
Norma Jean Lutz
Time Period:  1923  For ten-year-old Carrie Moe, friendship with a Jewish immigrant is perfectly normal. So why are many of her other friends uptight about that? Sadly, in 1924, bigotry is a powerful force in society-so much so, that the white-robed members of the Ku Klux Klan plot violence against Jews. Carrie's Courage is the story of a young girl who stands up for a friend in the face of persecution. Using actual historical events as a backdrop, this young readers' novel shows that standing up for others, though not always popular, is always right. It's a perfect teaching tool, at an even better price!
1 Vote

Carrie's Courage is a wonderful book about a ten-year-old girl named Carrie Ruhle who befriends a Jewish girl named Dvora who has just moved into town. Will Carrie be able to stay friends with Dvora though because her best friend Violet absolutely hates Dvora since she is Jewish? Can Carrie save her new friend from the white-robed Ku Klux Klan who is terrorizing the Jews, blacks, and other immigrants in her neighborhood before it's too late?