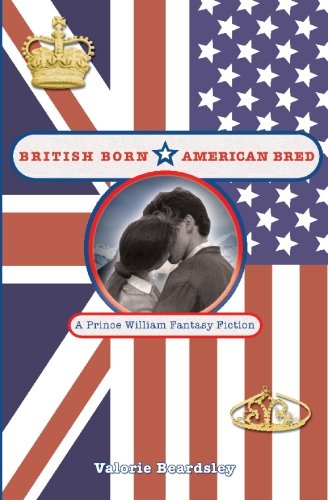 British Born, American Bred
Valorie Beardsley
A witty British girl raised in America. A strong-willed young prince slated to assume the highest office in England. When their worlds collide. . .anything can happen! In this stunning re-imagining of the life of Prince William of Wales, author Valorie Beardsley follows the life of fictional Emily Harrison, a British-born girl who is raised in Los Angeles, and who just happens to have a crush on Prince William of Wales. Emily returns to England as a young adult to attend St. Andrews University, and is amazed when the man of her dreams is sitting in her classroom! Can William and Emily conquer their fears and succeed in love, when the whole world is watching them? Told with dazzling detail and sparkling insight, British Born American Bred is a delightful mingling of fantasy and reality that will have readers wondering not only what happens next, but also what really happens in the lives of the Royal Family. Beardsley combines the depth of historical fiction with the pace of a tabloid, making British Born American Bred one of the most original U.S. exports of the year!
2 Votes

British Born, American Bred is a fanfiction of Prince William's life from when we meet him at St. Andrews University right up until he dies as an old man or rather an old, and much loved, King. To say this book is about Prince William and the narrator, fictional Emily Harrison, who was born in Britain but brought up in America (hence the title), falling in love would be an understatement. William and Emily fall in love and get engaged within a year of meeting each other and in the first 50 pages of book.

Emily goes to St. Andrews University, where she meets and falls in love with Prince William. They get engaged and then married. The novel goes through their lives almost day to day, with many of the hurdles of life. Of course as William is the Prince, and later becomes King, Emily also has to deal with press related stuff and other royal engagements. The novel also follows the lives of their relatives and close friends, and is told by an unknown narrator.