The Brewster Boys and the Eve of Infamy 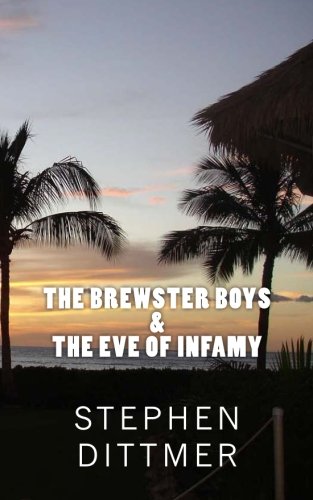 The Brewster Boys and the Eve of Infamy
Stephen Dittmer
Peter, Jonathan, and Abigail are your average teenagers trying to endure their boring summer in everyday America. They quickly discover this summer will be like no other. Stumbling upon a criminal’s malfunctioning time device, the friends find themselves thrust back to the Hawaiian island of Oahu on the eve of the attack on Pearl Harbor. There, they uncover a plot to prevent the attack from ever taking place. However, there is nothing noble about this plan. The owner of the device is a Nazi sympathizer named Klara Beich. She is the granddaughter of an infamous German scientist, Dietrich von Wexler, who has created many abnormal inventions. By stopping the attack and halting America’s entrance into the war, Klara would prevent her grandfather from being tried at the Nuremberg trials, and also ensure a victory for Nazi Germany. Conflicted between saving the lives of thousands of Hawaiians and preventing a major change in world history, the Brewster boys and Abby, along with their new local friend, Chuck, face many unforeseen obstacles: Nazi inventions, Japanese bombers, mobster henchmen, and the use of 1940’s slang!
3 Votes

When an average summer afternoon is interrupted by the arrival of some odd-looking people searching for a mysterious object with a ‘thermal switch’, it at first seems a welcome distraction; but things soon turn into something much more serious, as the fact is revealed that the people are time traveling super-criminals and the thing they are looking for is a ‘temporal device’ for traveling through time and space.  Things become dicey when the device transports the Brewster Boys (Jon and Pete), and their friend Abby to Pearl Harbor the day befor

What's this?
The Brewster Boys and the Eve of Infamy review by alison_S

In The Brewster Boys and the Eve of Infamy, protagonists Pete and Jon find themselves forcibly fleeing the clutches of a Nazi sympathizer, but what little solace they find in 1941 Hawaii is promptly ruptured by the impending attack on Pearl Harbor. Time-traveling henchmen swarm the island’s beaches, and a Japanese fleet prowls the Pacific. Entangled in the plot to thwart military history, the Brewster boys, along with cohorts Abby and Chuck, must dodge stray bullets and enemy forces in their struggle to right the past.

What's this?
The Brewster Boys and the Eve of Infamy review by sisto8

This book is about three friends who find themselves in the middle of an adventure.  One of them discovers a little device that they think somebody else is looking for.  When that somebody learns they have found it, she and her thugs chase them all the way back to the eve of the Pearl Harbor attack.  They must learn where and when they are, as well as dodge police, kidnappings, threats, and the attack.  Can they make it back before the bombs start flying?  Or are they stuck in Pearl Harbor becoming a target for the Japanese attackers?