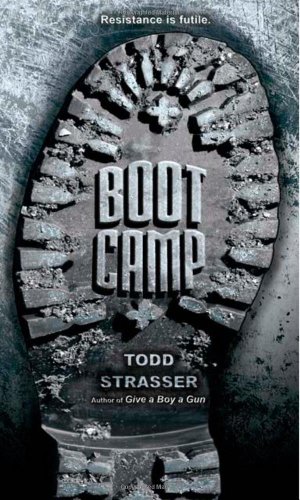 Boot Camp
Todd Strasser
In the middle of the night Garrett is taken from his home to Harmony Lake, a boot camp for troubled teens. Maybe some kids deserve to be sent there, but Garrett knows he doesn't. Subjected to brutal physical and psychological abuse, he tries to fight back, but the battle is futile. He won't be allowed to leave until he's admitted his "mistakes" and conformed to Harmony Lake's standards of behavior. And there's no way to fake it. Beaten, humiliated, and stripped of his pride, Garrett's spirit is slowly ebbing away. Then he hears whispers of an escape plot. It's incredibly risky -- if he's caught, the consequences will be unthinkable -- but it may be his only way out. In this tense, riveting novel, award-winning YA author Todd Strasser reveals what really goes on in highly secretive -- and notoriously dangerous -- boot camps, a stealth prison system where any teenager under the age of eighteen can be imprisoned at his parents' whim.
1 Vote

Boot Camp by Todd Strasser is about fifteen-year old Garrett. Garrett is very smart. So smart, in fact, that he can skip school and still make honor roll. He's also dating his teacher, who is eight years older than him. Though these are hardly crimes, Garrett is sent to Lake Harmony, a boot camp designed to teach teenagers to obey their parents. Garrett undergoes physical and psychological abuse every day. The only way to freedom is to escape-but how does one break out of a prison?