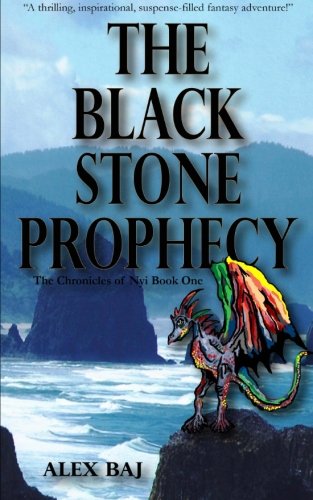 The Black Stone Prophecy (Volume 1)
Alex Baj
Tom O'Malley is a sarcastic, popular 12-year old who has spent the past year avoiding friends and hiding out at home after a terrible accident. But when Tom finally agrees to leave home for summer camp, he is drawn into the transformative world of Nyi, where the secrets of Earth -- from the extinction of the dinosaurs to the origins of trolls -- are revealed, and where Tom and his friends must face an ancient evil. This suspenseful, witty debut novel deftly explores the power of friendship and the importance of believing in and accepting one's own transformation. It leaves readers begging for the second book in what has the potential to become a beloved middle grade fantasy series.
3 Votes

The Black Stone Prophecy is a coming-of-age story where the main character (Tom O’Malley) starts off in the story as a quiet, outsider who doesn’t have close friends due to a recent personal tragedy, but as the story progresses he develops into a strong, powerful hero who develops close bonds with the other characters involved in the story. The plot is filled with inter-dimensional travel, super-powers and mutant dinosaur creatures which all combine to make a great read!

What's this?
The Black Stone Prophecy (Volume 1) review by sschu5

sschu5
This book is about how three friends and a dog find themselves in another world. When they get there they meet a girl who also accidentally came there. While they were trying to find their way back to Earth, they find out that they are actually part of a prophecy that is supposed to save the planet. Will they save the planet and get back to Earth safely?
Rating:
5

What's this?
The Black Stone Prophecy (Volume 1) review by Love3

This story starts with a child named Tom, who was in a car accident and lost his leg. After the accident, he was secluded from the world. In an attempt to help Tom become himself again, his mother sends him to a summer camp, so he can be social again. Things go wrong and Tom tries to run from the camp, but in a twist, gets sent to a different world with his two friends and the camp dog. They realize that things are not as they seem at first and find out they might be part of a bigger picture.