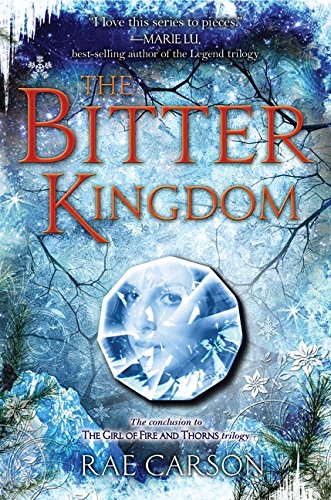 The Bitter Kingdom
Rae Carson
The New York Times‒best-selling series!"Carson joins the ranks of writers like Kristin Cashore, Megan Whalen Turner, and Tamora Pierce as one of YA's best writers of high fantasy."—LocusIn the deeply satisfying conclusion to the bestselling Girl of Fire and Thorns trilogy, seventeen-year-old sorcerer-queen Elisa travels into the unknown realm of the enemy to win back her true love, save her country, and uncover the final secrets of her destiny.Elisa is a fugitive in her own country. Her enemies have stolen the man she loves in order to lure her to the gate of darkness. As she and her daring companions take one last quest into unknown enemy territory to save Hector, Elisa will face hardships she's never imagined. And she will discover secrets about herself and her world that could change the course of history. She must rise up as champion—a champion to those who have hated her most. Riveting, surprising, and achingly romantic, Rae Carson has spun a bold and powerful conclusion to her extraordinary trilogy.
1 Vote

Elisa has to save Hector. The Invernos are attacking her allies and friends. It is her responsibility, with the help of her godstone, to save her people. With the help of Storm, Belen the spy, Elisa's best friend Mara, Hector, and a few others, she must turn the Joyan history of being filthy liars into honor. Yet still, she has no clue of what she is meant to do with her powers from above. Will it kill her like it killed all the bearers before? Elisa has so many questions, but she is desperate to be a good queen. She will not let anything stop her.