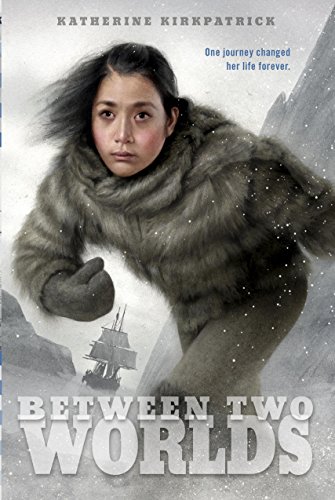 Between Two Worlds
Katherine Kirkpatrick
Inspired by a true story, Between Two Worlds is an impassioned coming-of-age novel set in a land of breathtaking beauty and danger, where nature and love are powerful and unpredictable forces. On the treeless shores of Itta, Greenland, as far north as humans can settle, sixteen-year-old Inuit Billy Bah spots a ship far out among the icebergs on the bay—a sight both welcome and feared. Explorers have already left their indelible mark on her land and its people, and a ship full of white men can mean trouble. The ship carries provisions for Robert E. Peary, who is making an expedition to the North Pole. Peary and Billy Bah have a history—as a child, she spent a year in America with his family. When Peary’s ship gets caught in the ice, Billy Bah sets out on a harrowing quest to find him.  Billy Bah’s journey is one that will bring her to the very literal edge of the earth, imperil her life and question what it means to be between two worlds. “Rich details . . . create a total immersion in Inuit life.” —Publishers Weekly, Starred   “An intriguing viewpoint to a place and time rarely written about in young adult fiction.” —SLJ “A compelling . . .  portrait of a community accustomed to life on the knife edge of survival, of extraordinary beauty and harsh realities. . . . A rare look at culture clash arising from polar exploration.” —Kirkus Reviews
1 Vote

Between Two Worlds by Katherine Kirkpatrick is the story of 16-year-old Eqariusq (also called Billy Bah), an Inuit girl in Greenland. One day a ship arrives in Billy Bah’s small village, bearing supplies for the explorer Robert Peary. On the ship are Peary’s wife and daughter with whom Billy Bah lived for a year in America. Billy Bah is glad to see them, but is torn between the fascinating world of the white men and her own, and that conflict intensifies when her husband starts trading her to a sailor on Peary’s ship.