The Better Part of Darkness 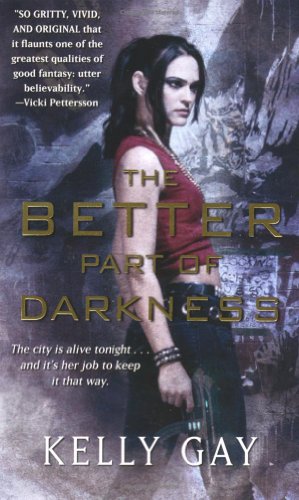 The Better Part of Darkness
Kelly Gay
Atlanta: it's the promised city for the off-worlders, foreigners from the alternate dimensions of heaven-like Elysia and hell-like Charbydon. Some bring good works and miracles. And some bring unimaginable evil.... Charlie Madigan is a divorced mother of one, and a kick-ass cop trained to take down the toughest human and off-world criminals. She's recently returned from the dead after a brutal attack, an unexplained revival that has left her plagued by ruthless nightmares and random outbursts of strength that make doing her job for Atlanta P.D.'s Integration Task Force even harder. Since the Revelation, the criminal element in Underground Atlanta has grown, leaving Charlie and her partner Hank to keep the chaos to a dull roar. But now an insidious new danger is descending on her city with terrifying speed, threatening innocent lives: a deadly, off-world narcotic known as ash. Charlie is determined to uncover the source of ash before it targets another victim -- but can she protect those she loves from a force more powerful than heaven and hell combined?
1 Vote

Tweet
The Better Part of Darkness review by ECra

This book is a fantasy adventure novel. Several years before the book began, the Revelation occurred, bringing off-world beings reminiscent of the angels, fairies, and demons of myth into open contact with humans. As a result, Atlanta has become a mixing pot and hotbed of off-world and human crime. The Atlanta P.D. Integration Task Force partners humans and non-humans to deal with this crime. One of its detectives is Charlie Madigan, a divorced mother of one.