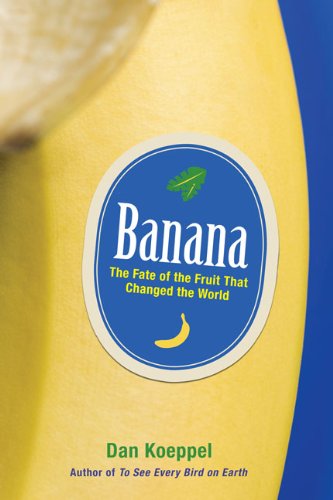 Banana
Dan Koeppel
Read Dan Koeppel's posts on the Penguin Blog. A gripping biological detective story that uncovers the myth, mystery, and endangered fate of the world’s most humble fruit To most people, a banana is a banana: a simple yellow fruit. Americans eat more bananas than apples and oranges combined. In others parts of the world, bananas are what keep millions of people alive. But for all its ubiquity, the banana is surprisingly mysterious; nobody knows how bananas evolved or exactly where they originated. Rich cultural lore surrounds the fruit: In ancient translations of the Bible, the “apple” consumed by Eve is actually a banana (it makes sense, doesn’t it?). Entire Central American nations have been said to rise and fall over the banana. But the biggest mystery about the banana today is whether it will survive. A seedless fruit with a unique reproductive system, every banana is a genetic duplicate of the next, and therefore susceptible to the same blights. Today’s yellow banana, the Cavendish, is increasingly threatened by such a blight—and there’s no cure in sight. Banana combines a pop-science journey around the globe, a fascinating tale of an iconic American business enterprise, and a look into the alternately tragic and hilarious banana subculture (one does exist)— ultimately taking us to the high-tech labs where new bananas are literally being built in test tubes, in a race to save the world’s most beloved fruit.
1 Vote

With every bite of this book, you will sink into the information. There are many different genres to this book. It is history, and a science adventure all to explain the fate and mystery of bananas. This author is crazy about bananas, so you can see all of the passion in his words. You will learn about your everyday fruit in an interesting way.