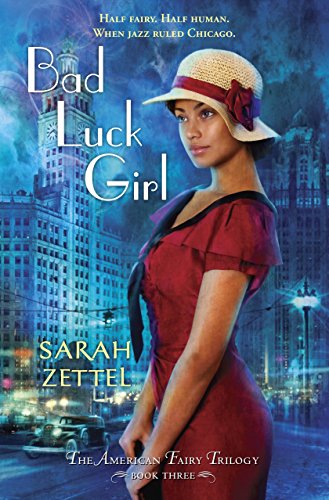 Bad Luck Girl (Book 3)
Sarah Zettel
Fans of Libba Bray's The Diviners will love the blend of fantasy and jazz-hot Chicago in this stylish series.After rescuing her parents from the Seelie king at Hearst Castle, Callie is caught up in the war between the fairies of the Midnight Throne and the Sunlit Kingdoms. By accident, she discovers that fairies aren't the only magical creatures in the world. There's also Halfers, misfits that are half fairy and half other--laced with strange magic and big-city attitude. As the war heats up, Callie's world falls apart. And even though she's the child of prophecy, she doubts she can save the Halfers, her people, her family, and Jack, let alone herself. The fairies all say Callie is the Bad Luck Girl, and she's starting to believe them.A strong example of diversity in YA, the American Fairy Trilogy introduces Callie LeRoux, a half-black teen who stars in this evocative story full of American history and fairy tales.Supports the Common Core State Standards.Praise for Bad Luck Girl:"All the powers that be want to use Callie's magic to win the war for their side, and nobody cares what happens to Callie, Jack or the Halfers, raising the stakes to frighteningly high levels. Callie and Zettel bring this stellar trilogy to a satisfyingly sentimental conclusion." --Kirkus Reviews, Starred Review"[Zettel's] strong characterizations, historical detail, and carefully constructed fantastic elements create a high-energy literary fusion that fans will devour." --SLJ
1 Vote

Bad Luck Girl is about fourteen year old Callie LeRoux who is trying to cope with the fact that she's a fairy princess. She has the help of her best friend Jack Hollander (a human), her mother (a human), and her long lost father (a fairy prince), on her journey to end a prophecy written decades before she was even born. The prophecy says that a girl who can open gates to different worlds will have to chose a path. Callie knows that there is only one right path but she is manipulated by the ohter paths so that she may chose them. Will she, or will she not?